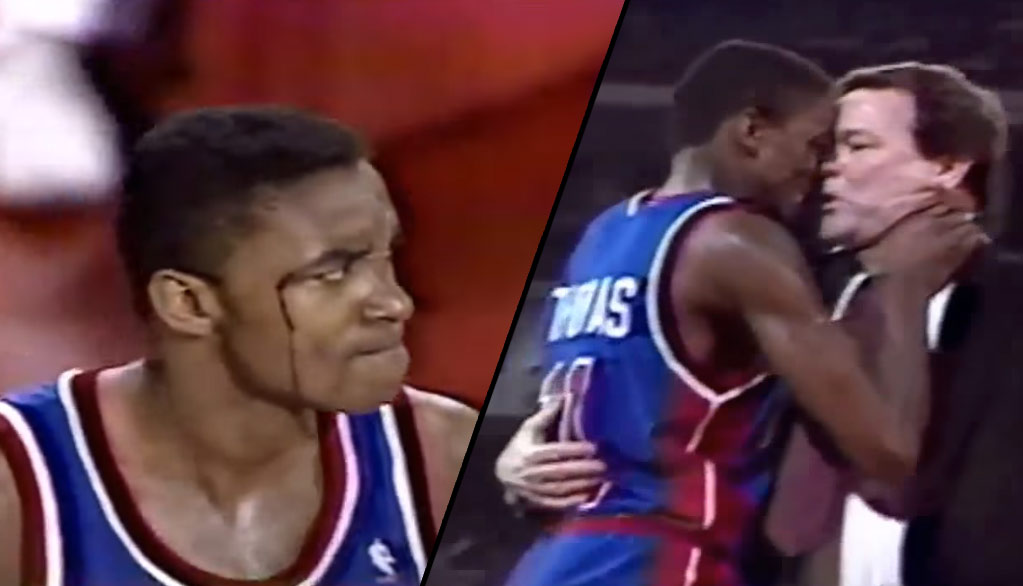 The leader of the 80’s Bad Boy Pistons, Isiah Thomas, has dished out a lot of pain (both mental and physical) during his love him or ...(Read more)

The leader of the 80’s Bad Boy Pistons, Isiah Thomas, has dished out a lot of pain (both mental and physical) during his love him or hate him basketball career. The Hall of Famer has also been on the recieving end of a lot of painful moments, including one of the nastiest elbows in NBA history. That dirty elbow was delivered by the Mail Man in 1991 and it required 40 stitches. Two years before that cheap blow, Thomas took one from the guy who challenges Malone for the title of deadliest elbows in NBA history, Bill Cartwright.

The incident took place during an overtime of a 1989 rivalry game against MJ and his Chicago Bulls. A bleeding Thomas was so infuriated after the hit by Cartwright, he tried to go after the foot taller center but was held back by his teammates. When assistant coach Brendan Malone came over to say something to him, Thomas pulled a Sprewell and put his hands on Malone’s throat. Malone kept his cool and the Pistons went on to win the game 104-98 behind a game-high 34 from Thomas, who needed six stitches for the cut and was not suspended for putting his hands on his coach…because it was the 80s, when you could throw a punch at a player and not even be ejected.

The two teams met again later in the season and it only took eight minutes until the two got into it again. But this time, Thomas threw and landed a punch on Cartwright, which led to an ejection, a two-game suspension, a $5,000 fine and a broken hand. Cartwright was given a one-game suspension and $2,500 fine for his actions.

After the game, Thomas said he has had multiple conversations with NBA director of operations Rod Thorn about the Bulls center.

“We have played the Bulls six times this year, and Cartwright has hit me five times. I stole the basketball from him, and he hit me. I pushed him and was about to turn away when he rushed me.

“You don`t want to fight, but I’ve had to fight for everything I’ve gotten in life. Sometimes you have to.”

Doctors predicted the injury would sideline Thomas for three-four weeks but since Thomas is arguably the “toughest pound-for-pound” player of all-time, he played the rest of the season, helped take down the Bulls in the playoffs and then helped his team sweep the Lakers in the NBA Finals.

Another interesting story is the relationship Thomas and assistant coach Brendan Malone ended up having. Malone would go on to become the first head coach of the Toronto Raptors and after one season was fired by Thomas, who was the the GM. Thomas offered Malone a front-office job and the offer was declined.

Years later, Thomas became the head coach of the Indiana Pacers and offered Malone an assistant coaching job. Malone accepted and after a few seasons left to join the New York Knicks. He reportedly left because he didn’t like the coaching environment.

As fate would have it, after being fired from the Pacers, Thomas was hired to become the President of Basketball Operations for the Knicks. Reunion!