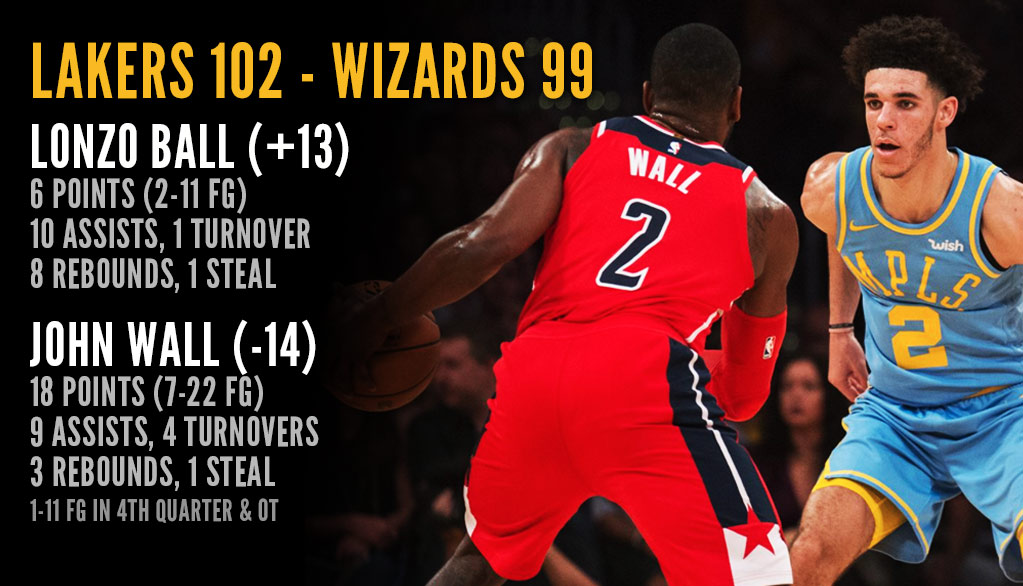 “Washington better beware, Lonzo ain’t losing again.” “Man please, Wall will torture him for 48 minutes.” “No mercy.” Those are three of the most talked about ...(Read more)

Which Players Had To Eat Their Words After The Lakers Comeback Victory vs The Wizards?

“Man please, Wall will torture him for 48 minutes.”

Those are three of the most talked about quotes over the past few days. Those are the quotes that had people thinking gang sign John Wall was going show up to Staples and “murder” or “destroy” Lonzo “Walking The Green Mile” Ball in front of his father. Those are the quotes that had people in daily fantasy leagues thinking Wall was going to give them a Wilt Chamberlain stat line and gamblers thinking the Wizards were going to easily beat the Lakers by 6.5 points.

“See me after the game. They gonna get this W”

So let’s revisit some of the best quotes over the past few days and see who had to eat them and who got to say, “I told you so!”

Quote: Washington better beware, Lonzo ain’t losing again. Not in the same week
Outcome: Proud Dad got to watch his son get the W and flirt with another double-double.

Quote: Man please, Wall will torture him for 48 minutes.
Outcome: Not only did Wall not torture Ball, after the game Gortat had the torture of having to meet LaVar Ball. According to Washington Post’s Candace Buckner, LaVar and Gortat “cordially embraced” after the game when Ball spotted the center and yelled, “Gortat! Don’t you leave me!”

Quote: Lonzo should be very worried about John Wall…He’s not on this level. He’s not ready for someone like John Wall and neither are the dudes backing him up, talking smack. You’re Brandon Ingram, what the hell are you running your mouth for. You can’t mess with John Wall either.
Outcome: Read the next outcome.

Quote: The competitor in Lonzo, he didn’t take it so well and with his teammates behind him, we didn’t take it so well.
Outcome: Ingram had a double-double (19 points and 10 boards) as well as the shot that forced OT. The Lakers also got a double-double from Larry Nance and a strong late performance by Julius Randle in limited minutes (11 points, 9 rebounds and 3 blocks in 19 minutes).