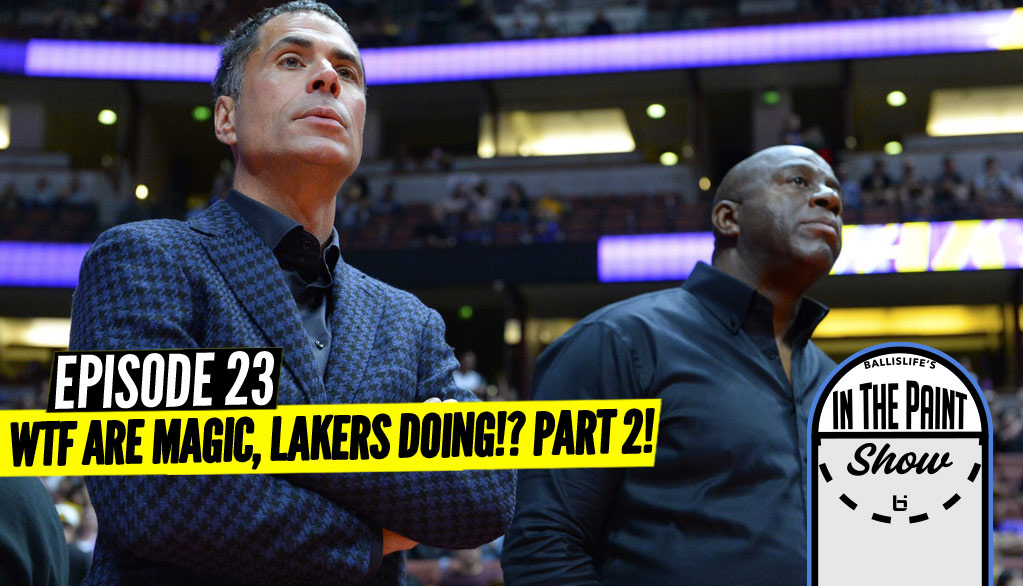 WTF Are The Lakers DOING (Part 2)?! “In The Paint” Podcast GOES IN!

In episode No. 23 of our  “In The Paint Show,“ hosts Ronnie Flores and Devin Ugland cover a bunch of hot topics, including more Los Angeles Lakers drama that in many ways is overshadowing the Golden State Warriors’ historic run to five consecutive NBA Finals. In Episode No. 10 we thought the Lakers’ drama had reached it apex surrounding the Anthony Davis botched trade, but what’s transpired over the last 48 hours is just insane! We break down Magic Johnson’s comments on ESPN’s “First Take”, his fractured relationship with the Lakers’ General Manager Rob Pelinka and what Magic’s former employer now has to do to turn around a franchise that has become more known for its off-court drama that its wins on the court.

Was Johnson in the wrong for speaking about the Lakers on the day it had a presser to announce Frank Vogel as head coach? Was Magic in the right for trying to clear the air publicly about what he perceived was backstabbing by Pelinka? Is Jeannie Buss in over her head as the predecessor to her father and Magic’s close friend, the late Dr. Jerry Buss? What should the Lakers do with the No. 4 pick in the 2019 NBA Draft? Will the Lakers be a playoff team in 2019-20?

We go Hard in the Paint about the whole saga!

It’s ironic we are on Episode No. 23 because this is our best pod yet! We bring in three special guests to break down all the latest topics in hoops. First, we bring on former Lakers’ second round draft pick Duane Cooper to talk about Magic Johnson and his relationship with the franchise, the Buss family and his experience in briefly playing with the Magic Man as he attempted to comeback to the NBA the year Cooper was drafted in 1992.

Our second guest is Kyle Goon, the Lakers’ beat reporter for the Southern California News Group. Goon gives us his insights on the Lakers’ current situation and offers his prospectus on Vogel and and the 2019-20 Lakers.

Some say the 2019 NBA Draft is a three-man deal with Zion Williamson, Ja Morant and R.J. Barrett, so the Lakers have a big decision with the No. 4 pick. We bring in our third guest, NBA Draft analyst Rashad Phillips of Sports Talk 2319 to break down the upcoming draft. Phillips gives his insight on what the Lakers should do with the fourth pick, his biggest sleepers after the top three and and his late round gem that other experts are sleeping on.

This is our deepest and best episode yet, so make sure to give our Pod a listen and share it with friends!