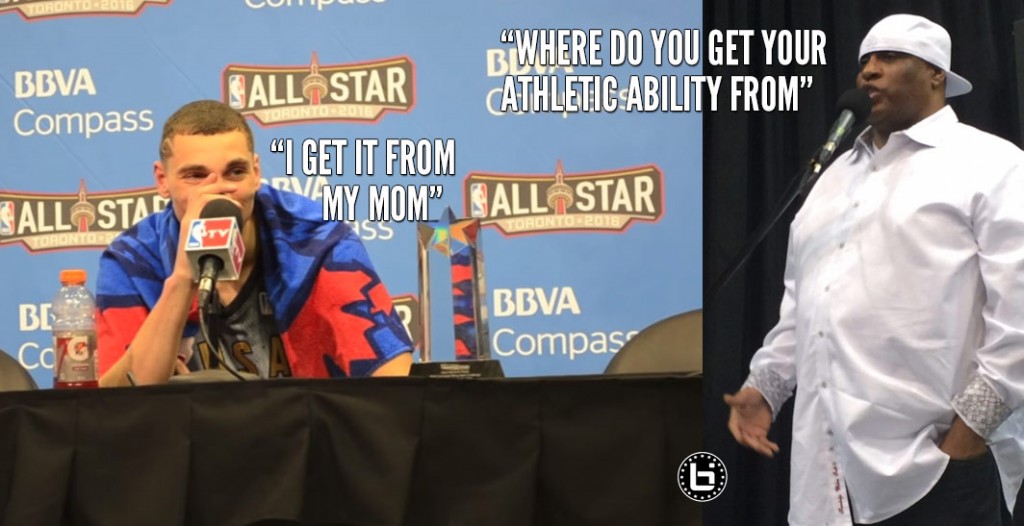 Knock on wood but unless somebody knocks Zach LaVine out before the NBA dunk contest on Saturday, LaVine is going to go home from Toronto with ...(Read more)

Knock on wood but unless somebody knocks Zach LaVine out before the NBA dunk contest on Saturday, LaVine is going to go home from Toronto with 2 trophies to put next to last year’s dunk contest trophy.

On Friday, the young pup won MVP of the Rising Stars Challenge after scoring 30 points, grabbing 7 boards, dishing out 4 dimes and helping lead his USA team to a 157-154 win over the the World. After the game, the MVP answered questions about the dunk contest, his teammate Wiggins, first memories of Kobe Bryant and where he gets his athletic ability from.  What makes the last question so funny is because the person asking is former pro football player Paul LaVine aka Zach’s Dad.

“You can’t do that” is what I’ve been saying since I saw Zach win our high school dunk contest in 2013.  I was shocked at the Youtube type dunks he was able to execute on just 1 attempt. Then a year later he somehow topped that performance with more jaw dropping dunks at a Seattle Pro-Am dunk contest against a well known YouTube dunker.

Then a year after that (last year) Zach put on the best NBA dunk contest performance I’ve seen in over a decade.  And he did it with his “safe dunks.” And if you hear what he has in store for the contest today, you are going to say “you can’t do that” and then thank his parents for giving him the athletic ability he has.