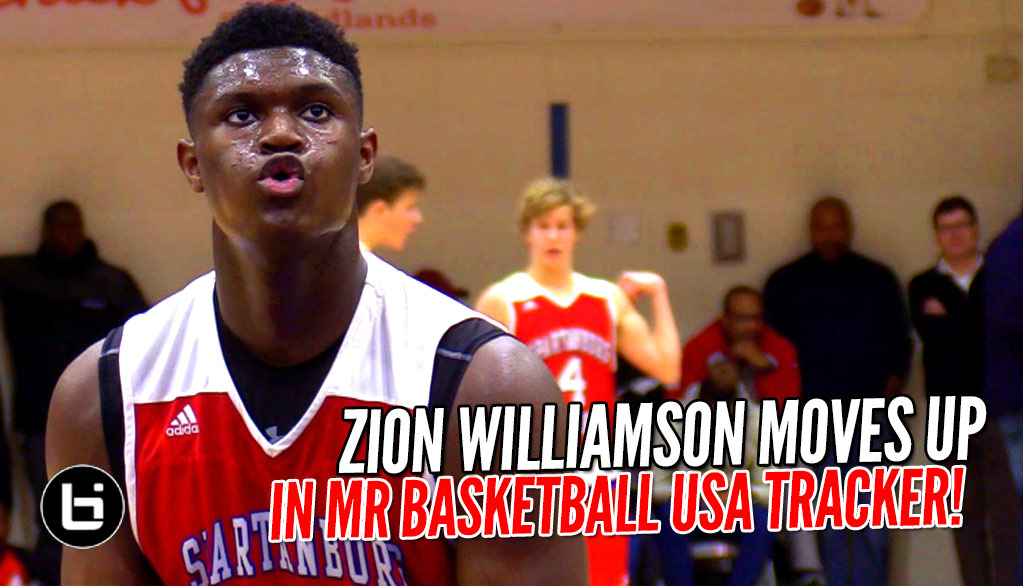 Michael Porter becomes the second player in the 10-year history of the Mr. Basketball USA Tracker powered by Ballislife.com to earn a perfect score. Porter’s Nathan Hale (Seattle, Wash.) team is also No. 1 in the FAB 50. The other big news in the updated tracker is the rise of junior phenom Zion Williamson of South Carolina.

Individual talent and winning doesn’t always go hand-in-hand, but when the two mesh, the results are often spectacular. That is clearly the case in the updated 2016-17 Mr. Basketball USA Tracker powered by Ballislife.com.

Michael Porter Jr. of FAB 50 No. 1 Nathan Hale (Seattle, Wash.) was considered on par with DeAndre Ayton of Hillcrest Academy (Phoenix, Ariz.), last year’s National Junior Player of the Year, as the nation’s top prospect and national player of the year candidate in the preseason. The Washington-bound Porter edged the 7-footer originally from the Bahamas by a single point in the preseason Tracker, but Hale’s 17-0 record and Porter’s role in the Raiders’ ascension to the top of the team rankings has created some separation.

Both continue to appear on every ballot of the 10-man Mr. Basketball USA Tracker Panel and Porter was the first-place vote-getter on each ballot. In the preseason, Porter and Ayton received five first-place votes each. Porter becomes the second player in the 10-year history of the Mr. Basketball USA Tracker to earn a perfect score of 100 points. The first player to turn the trick was point forward Ben Simmons of Montverde Academy during the 2014-15 season. Simmons was so dominant in helping Montverde Academy win the third of three consecutive mythical FAB 50 national titles, he collected every single first-place vote on each ballot throughout the entire season. Simmons was the No. 1 pick of the 2016 NBA Draft after one season at LSU.

Porter has No. 1 pick type potential, but is currently focused on leading Hale to an undefeated season. He’s had some monster games on big stages, including a 27-point, 15-rebound, 4-steal performance against No. 2 Sierra Canyon (Chatsworth, Calif.). He also had 34 points and 11 rebounds in a Metro League win over No. 24 Garfield (Seattle). Currently averaging over 35 points and 15 rebounds per games, panel member Frank Burlison of BurlisonOnBasketball.com feels Porter is the best player in high school basketball by a fairly healthy margin.

Joining Porter and Ayton (who collected six second-place votes) on all ten ballots is point guard Trevon Duval of FAB 50 No. 6 IMG Academy (Brandenton, Fla.). The explosive point guard is averaging 16.1 ppg, 7.7 apg, and 2.9 spg for a talented team that has recorded 11 wins over teams that are currently or previously FAB 50 ranked so far this season.

The other big news in the national player of the year race besides Porter’s dominance in the rising candidacy of junior forward Zion Williamson of Spartanburg Day School (Spartanburg, S. C.). Williamson was our top-rated player at the 2016 NBPA Top 100 Camp, but no one could foreshadow his newfound popularity and fame. His unique blend of power and athleticism has made him high school basketball’s most viral player and its social media king. Nicknamed the “Cheatcode” because of his spectacular blocks and dunks, Williamson is currently averaging 36.1 ppg, 13.4 rpg, 2,4 spg, and 2.7 bpg for a 17-6 club.

“Williamson was great in December… If Collin Sexton wasn’t putting up similar individuals numbers, then he would be No. 4 on my ballot with a bullet!” said panel member Van Coleman of The Basketball Channel.

In addition to Coleman’s endorsement of Williamson as a top five overall player in the nation, the junior sensation received another fifth-place vote in addition to a second-place vote. He appeared on seven ballots and tallied 43 overall points after appearing on three ballots (18 points) in the preseason.