Here’s a statement I’ve been saying for 18 years that’s going to sound ludicrous to most people near the age of 18: Kobe Bryant is one of the top 10, if not 5 (i’m stretching), best dunkers of all-time!

There’s a video above with 100 reasons why I believe that, but you might bring up there’s also a top 100 dunks by Carmelo Anthony and JaVale McGee on YouTube and they sure the hell aren’t even in the top 100.  So to support my opinion, I created a “dunk checklist” with some valid points and some stuff that sounds like BS i’m coming up with off the top of my head just to say or show off something cool about Kobe.

Does he have a dunk contest championship?

Yes he does. I’ll admit his 1997 NBA showing wasn’t that great (shout out to Darvin Ham. He was robbed in 97 and told me about it on camera but the mic wasn’t on) but his 1995 high school dunk-off with Lester Earl was epic?

Has he ever done a “show dunk” in a game?

In the early to mid 90’s, the best show dunks you were going to get in a game was an occasional windmill from a group of guys I can count on 1 hand and some reverse dunks. During Kobe’s first couple of seasons, he, along with Vince Carter, unofficially set the record for most windmill, reverse and 360 dunks in a game. Kobe, especially as #8, has thrown down so many 360 dunks in a game, there’s actually a ‘Top 10 360 Dunks By Kobe” mix out there.

Showbe was such a showboat in his early days, he even threw down a between the legs dunk during a game in high school. Keep in mind this was 1994, when you could win a NBA dunk contest with an Eastbay dunk.  Him doing that dunk in 94 is like a high school doing a 360 scoop mailman dunk out of the hands of a mascot on a hoverboard during a game today – OK, maybe not.

How impressive is his poster collection?

If I had a poster of every nasty poster dunk Kobe has made during his career and pinned them to the wall of a bedroom, the walls would be more crowded than a 14 year old One Direction fan’s wall. Just look at these beauties below! And don’t forget about his dunks on Yao Ming, Kim K’s ex, Jaren Jackson, Steve Francis, Dirk, the Kandi Man, the Admiral and Tim Duncan!

Has he dunked on a bunch of white centers that everybody hated?

He has Greg Ostertag and Shawn Bradley on his resume. That’s enough to get you a job offer or promotion and as a bonus you can add Raef LaFrentz and the Dunking Dutchman (I actually kind of liked Rik Smits). 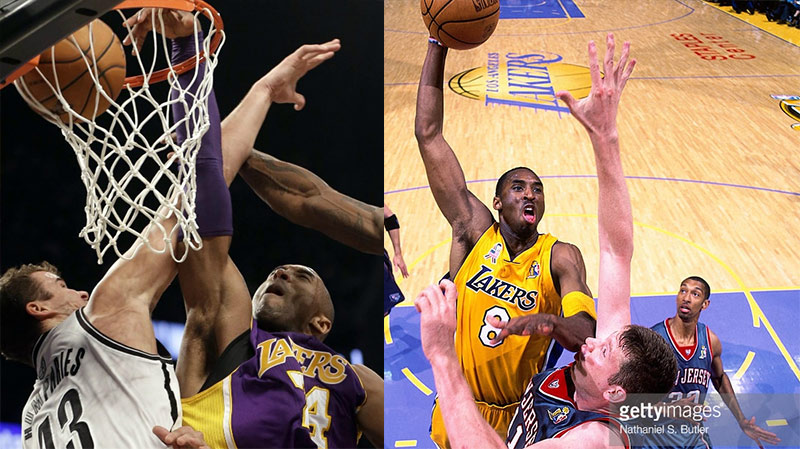 Has he welcomed a new teammate by dunking on him in practice?

In 2012, Kobe welcomed new teammate Antawn Jamison to the Lakers by posterizing him in practice. He also dunked on the undunkable Shaq in practice once, but let’s pretend I didn’t mention that yet.

Has he dunked on Shaq?

Yep! Shaq will only credit Derrick Coleman although he’s actually been dunked “on” by about 5 guys – not counting Kobe. I know, I know this shouldn’t count because Shaq wasn’t looking, but how many guys can claim they dunked on the Diesel in anyway?

Does he have a commercial showing him doing impossible dunks?

Does he? How awesome was this free throw dunk and behind the back dunk in this adidas ad?

Did he do the elbow dunk before Vince Carter?

2 years before Vince introduced the world to the elbow hang in the 2000 NBA dunk contest, Kobe Bryant did the dunk in the Philippines.

Has he dunked on a big man that’s almost half his age?

Earlier this season the 37 year old Kobe put 21 year old Clint Capela on a poster. That’s an age difference Woody Allen would be proud of.

Think about this: Clint was just a baby when Kobe Bryant was throwing down between the leg dunks in high school games.

I’m out of questions but if you weren’t impressed by my list and you are more of a mixtape guy than a countdown guy, then enjoy most of Kobe’s best dunks in this ULTIMATE (gotta use all caps) mix by Kobe lover Billy Doran of Dunkademics.