They said this was a common foul pic.twitter.com/zrl2T5qjVF

A video clip of 15 year old 2 sport athlete Jalen Preston has been making some buzz over the past couple of days.  The clip shows Preston – who plays for TJ Ford’s AAU team – taking a very scary fall after a dunk attempt during this past weekend’s Pearland Classic tournament.

What makes it so buzz worthy is it’s tough to figure out exactly what happened. Some are saying he jumped from too far away and didn’t have the hops to finish the dunk. If you have seen the video of him, at 14, posterizing a defender at last year’s CP3 camp, then you know that’s not the case.

Others joked on Facebook that it was the ghost of Kadeem Hardison from “The 6th Man.” 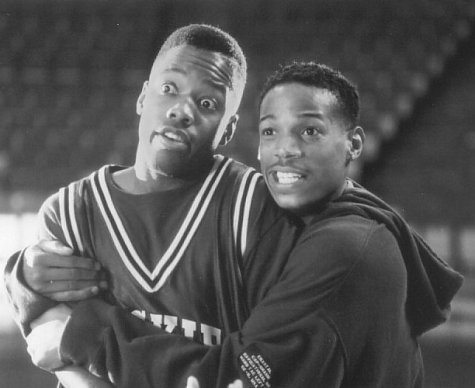 As funny as that is… I doubt it.  Same goes for an “invisible Randy Orton.”

What happened was he got tripped up in the air by the defender. And despite the hard fall, the ref didn’t call a flagrant which surprised Jalen who tweeted after the game  “they said this was a common foul.”

Thankfully Jalen was OK and despite the “common foul” he still scored a game-high 17 points in a 2 point win for TJ Ford’s Elite team that day.