When most people think about duels between Nique and Bird, they are going to think about Game 7 of the 1988 playoffs between the Hawks and Celtics. In that game, Wilkins scored 16 of his 47 points in the final quarter but was outgunned by Bird, who scored 20 of his 34 in the 4th of the Celtics victory. The two 80’s greats had many, many great duels against each other in the regular season too and this was one of my favs – maybe because the Hawks won!

On this memorable day, Dominique outscored Bird 54-to-24 in a three-point OT victory for Atlanta. Bird struggled with his shot (9-24 FG) for most of the game but made up for it by grabbing team-highs of 15 boards, 14 dimes and 3 steals.

A lot of credit has to go to Nique’s teammates for pulling out this victory: Doc Rivers had a game-high 18 assists and Kevin Willis was as beast with 18 points and 21 rebounds against the towers of powers that be McHale (36pts/11rebs) & Parish (13pts/12rebs).

Back to the Human Highlight Film, watching games like this just makes me even more baffled to why he wasn’t selected to the original NBA Top 50 list in the 90s. If you just look at this season, where Nique averaged 29 a game, you will see a 53-point game vs the Clippers, 38 on Bird a few months earlier and a 57-point monster performance and win against Michael Jordan and the Bulls.

I remember on an episode of NBA Open Court, the crew was talking about the list and the “next guys” and Chris Webber said, “All I can say is Duncan and Dirk know me very well.” Well, all I can say about Nique is “Bird, MJ and ever NBA superstar from the 80s know him very well.” 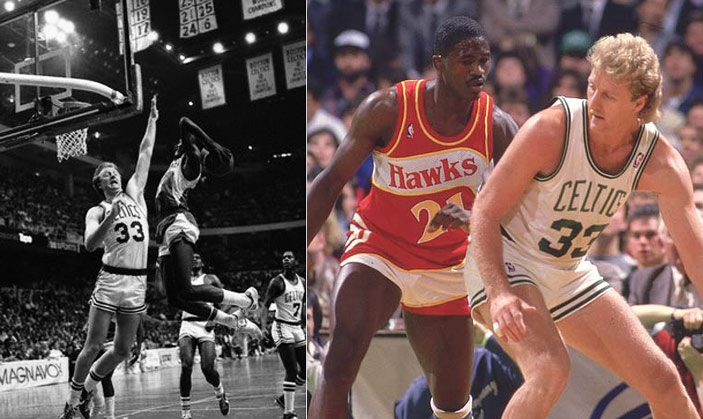