Almost 30 years after one of the most memorable Game 7s and one-on-one duels in NBA history, Larry Bird is still talking trash to Dominique Wilkins.

Earlier in the year, on March 5th of 2015 — almost exactly 30 years after the day Larry Bird dropped 60 points on the Atlanta Hawks — the Hawks honored The Human Highlight Film with a statue. A statue Larry Bird jokingly said before seeing it: “I’m pretty sure it’s not made in a defensive stance.”

Now flashback to May 22nd of 1988, Game 7 of the Eastern Semis in Boston, when Larry Bird’s defense was as effective as a Larry Bird statue. Dominique Wilkins scored a game-high 47 points, on an impressive 19-of-33 shooting, with the great Kevin McHale guarding him. But thankfully for Boston fans, Nique’s offense and some unwise trash talking by Kevin Willis woke up Larry Bird.

“We were running down the court — me, Bird, and Kevin Willis. Kevin reached across me and said “Don’t let that son of a gun score anymore man.”  said Wilkins. “I’m like what are you doing? Bird’s eyes got like this big. I knew it was going to be on then. It just woke him up. That’s where the great shootout began.

Bird scored 20 of his 34 points in the final quarter, which included nine points in a span of two minutes.

“It was like two gunfighters waiting to blink,” said Bird’s teammate Kevin McHale. “There was one stretch that was as pure a form of basketball as you’re ever going to see.” 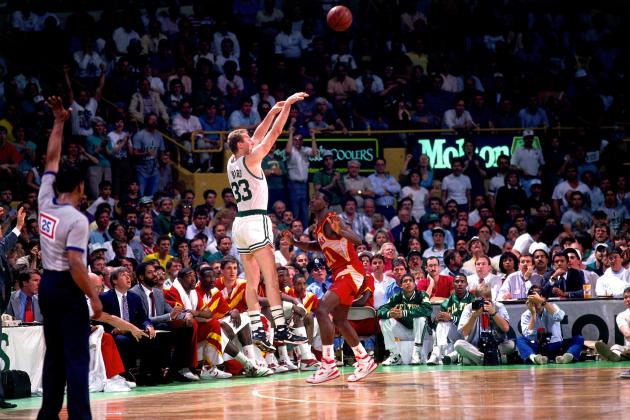 Nique’s teammate Doc Rivers added, “Bird and ‘Nique were in a different world. Late in the game, I was trying to get back in and I just kneeled there and watched them go back and forth.”

The stars did go back and forth as if they were the only two players on the court.

Then it all came down to a shot Nique had to intentionally miss. Down by three with one second left, Nique went to the free throw line, hit the first and intentionally missed the second in hopes of a lucky tip-in to force OT.  But luck doesn’t exist for outsiders in the Boston Garden, so the Celtics came away with a memorable 118-116 victory.

“It was a spectacular game, regardless of the circumstances. But the fact that it was a Game Seven made it all the more remarkable. It was the greatest NBA game I’ve ever seen.” said Coach Fratello.

As a bigger fan of the Hawks than Celtics, every time this game is brought up I have to bring up two memories. The first is when Nique outscored Bird 54-24 during that regular season and the other is when Nique put Bird on his ass when Bird actually thought he could take flight with The Human Highlight Film.

Nique and the Open Court crew talking about the game.