“It was a time I finally got a chance to play my game with no restrictions. It reminded me of high school again when I averaged forty four points a game. The team was short handed, lots of injuries and we needed some wins. We won the game also which made it sweeter.”

On February 10th of 1998, Washington’s Tracy Murray got his first start of the season and responded with a career-high 50 points against the Golden State Warriors. His previous career-high was 40 and his season-high of 26 was broken in the first half of this game. In the end, Murray connected on 18-of-29 shots and 5-of-10 from three, with the help of his very underrated teammate — the great Rod Strickland, who finished with an impressive 21 points, 20 assists and 12 rebounds. And you thought they couldn’t get along (Google it).

Michael Jordan and Gilbert Arenas are the only two players to have scored 50 for the franchise since this accomplishment.

Here’s some impressive info about the 1-time NBA championship you probably didn’t know: Murray averaged 44 points a game during his senior year at Glendora High and had the record for most points scored ever in the state of California, despite only playing three years.  He went on to play three years at UCLA, where he finished 5th on their All-Time scoring list. 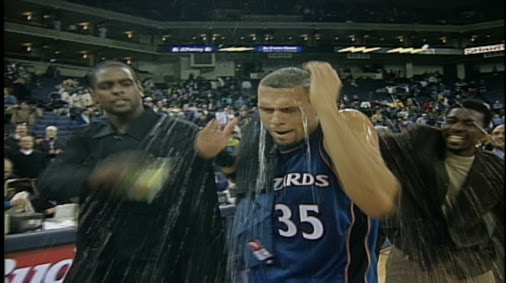