THIS VIDEO SHOWS WHAT SHOULD HAVE HAPPENED!

This is what really happened: On this date in history, June 28th of 2007, the Portland Trailblazers selected Greg Oden with the No. 1 pick in the 2007 NBA Draft. This left the Sonics with the easy decision of picking Kevin Durant with the second pick.

From day one, it’s been a night and day difference between their careers and ROI for their teams. But in 2007, a lot of people in Portland’s shoes would have also drafted the 7- footer with the first pick.

Take a look at this excerpt from an article written by Maurice Stokes for NBA.com before the draft.

Greg Oden is a winner. Think about it, his high school team went a ridiculous 103-7 and he led OSU to the national title game with a 35-4 record as a freshman.

Greg Oden is the complete package. He averaged 15.7 points, 9.6 rebounds and 3.3 blocks last season and is capable of dominating games without taking a ton of shots.

Greg Oden is a fan favorite. His smile and friendly demeanor off the court is reminiscent of another center who currently stars for the Miami Heat.

Greg Oden is an athletic freak. Scouts will be talking about his workout for years to come.Read this.

Greg Oden is capable of playing forward on offense. The way he runs the floor and his soft shooting touch make him the anti-Shaq.

Greg Oden is an underrated passer. He has shown that he has good court vision and is capable of making the right decisions with the ball.

Greg Oden is the type of player who performs his best on the biggest stage. Ask Florida after he hung 25 points, 12 rebounds and four blocks on them in the championship game.

Greg Oden is a center and history shows that centers win titles – lots of them. For proof, see Tim Duncan (he plays the five in my book), Shaquille O’Neal, Kareem Abdul-Jabbar and Bill Russell. And while we’re talking about Russell …

Greg Oden is the next Bill Russell. He changes games defensively, finishes with either hand around the rim, rebounds well and always appears to be in the right position.

Greg Oden is capable of making the Blazers a playoff team right now.

Greg Oden is a perfect fit for Portland, who hasn’t had a superstar in the middle since Bill Walton was lacing ‘em up (sorry Arvydas Sabonis and Rasheed Wallace).

Greg Oden is going to get much better. Remember, he played most of last season with an injured right wrist and still connected on over 60 percent of his shots from the field. The injury forced him to rely on his left hand which makes him an even more complete player.

Greg Oden is a franchise player right now. His turnaround jumper, jump hooks and power moves around the basket are unguardable.

Greg Oden is capable of knocking down 15-foot jumpers and commanding a double team, which will free up his teammates.

Greg Oden is only 19-years old but appears much older both physically and mentally. “You’re looking at a guy who is a physical specimen in Greg versus a very skilled guy in Kevin, so the comparisons are very difficult and that makes our job a little more difficult because we’re not comparing apples to apples,” said Blazers general manager Kevin Pritchard.

Greg Oden is the only player the Blazers should consider taking with the most prized pick of the draft.

Well then! Now let’s take a look at this excerpt from an article written by Stefan Swiat for NBA.com

Durant wowed the Trail Blazers by delivering a superb workout, while Oden admitted to “getting nervous” and telling the coaches that he needed to be “in better shape.” Can you imagine someone like Kobe Bryant or Steve Nash saying something like that? No chance.

Just like there is no chance that Durant would ever utter those words. Because like the other great ones, Durant has that same ultra-competitive drive and closing ability that is maybe the rarest commodity found in players.

That kind of mindset that doesn’t just want, but demands the ball at the end of games and thrives on showing everybody that he is the alpha dog. And usually, when you combine that mentality with a player who possesses great athleticism and incredible skill, you have type of player that collects championship hardware.

So if the Blazers want to avoid criticism and second-guessing and make the predictable play out of fear of being perceived an unconventional, they’ll choose Oden. But if they are looking for a versatile, game-breaking forward with a 7’5″ wingspan, a deadly outside shooting touch and an entire repertoire of offensive moves, they’ll take Durant.

Texas Longhorns coach Rick Barnes is obviously a little bias but his two cents is worth $100 million.

If they are looking for weight lifters to come out of Texas, that’s not what we’re producing. There are a lot of guys who can bench press 300 pounds in the NBA who couldn’t play dead in a cowboy movie. Kevin’s the best player in the draft—period, at any position.

I think we can all agree now, the No. 1 pick of the 2007 NBA Draft should have been used on Kevin Durant. Sorry, Greg. 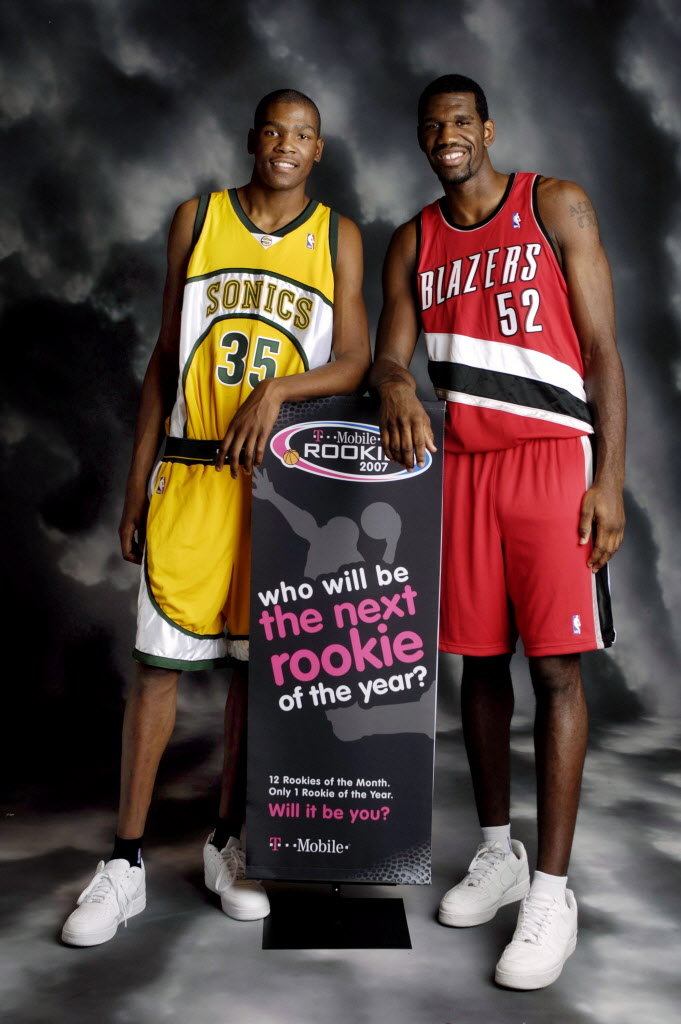