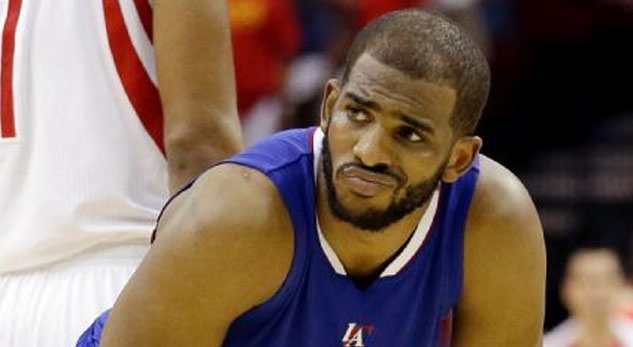 Players giving the Mutombo finger wag, tall guys giving short guys a piggyback ride, “Talledega Nights: The Ballad of Ricky Bobby” references. All funny stuff right? Chris Paul, who scored 26 points and dished out 10 assists in GM7, was the source of a few moments on Sunday that a lot of basketball fans will find funny and Clippers’ fans wont. Or moments you initially found funny but then didn’t when you thought about how good Paul is, how hard he plays and how his seasons end year after year.

Down by 16 with a little more than 5 minutes to go, Paul was called for an offensive foul on Ariza.  Most of the Rockets bench celebrated by clapping but injured Patrick Beverley gave Paul the Mutombo finger wag which means “not in my house.”

PAUL JUMPS ON TOP OF DWIGHT HOWARD TO FOUL HIM

I’m not sure why watching Paul jump is so amusing, but the last time I recall Paul jumping up and down is when he went crazy on DeAndre Jordan for not going up for a game-winning dunk after he grabbed an offensive board with 0.7 seconds left in regulation against the Blazers.  The game went into OT and the Clippers ended up losing.

Down by 8 with a little more than a minute left and DeAndre Jordan shooting free throws, Chris Paul made sure the refs saw him commit an intentional foul on Dwight Howard by jumping all over Dwight’s back as soon as DJ released his shot. Jordan missed and by the time Dwight grabbed the board Chris Paul already jumped on him twice.

The last time I saw Paul jump that high around Howard was 8 years ago when a young CP3 on the Hornets posterized Dwight (2:49)  when he was with the Orlando Magic and liked by a lot more people.

I knew as soon as I saw Paul try to ride Dwight like a pony that it would become internet gold and Vine clips like this one would be made.

Whatever happened to Ginuwine.

“The Clippers are still the Clippers.” That statement was a joke for decades (like when Ginuwine was popular) but not something you would expect to hear about a team with MVP candidates like Chris Paul and Blake Griffin on them, but the legendary Laker who wanted to buy the Clippers after then Clippers owner Donald Sterling went off on him during the infamous taped phone conversation, got to say it yesterday after the Clippers playoff exit.

The Clippers defeat is not on Chris Paul, he played with a lot of heart and energy!

The Clippers organization will always remember not closing out the Rockets in Game 6 at home. That game will always haunt them.

I thought the Spurs taught the Clippers how to win after a tough 7 game series. I was wrong. The Clippers are still the Clippers. 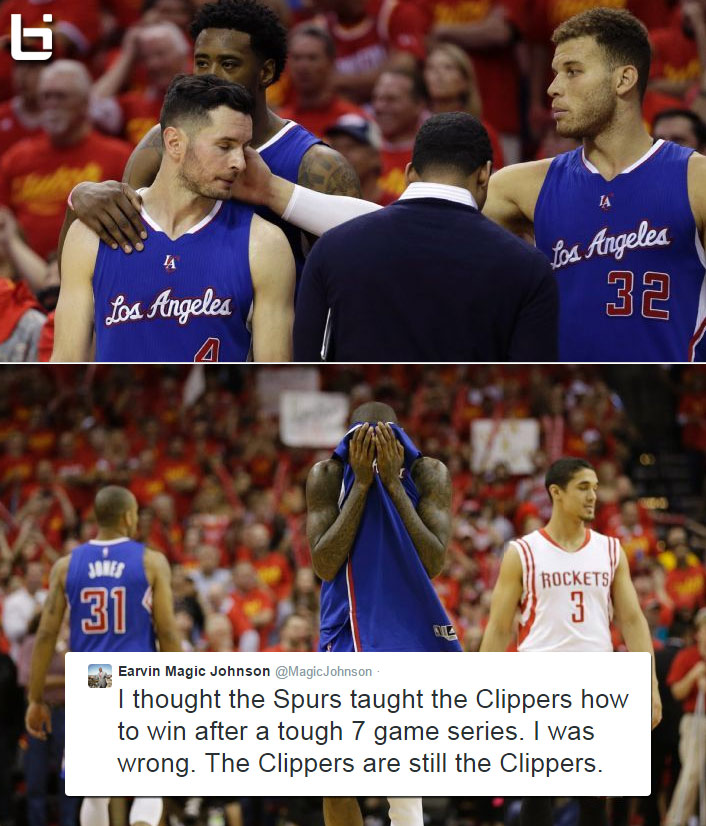 Chris Paul also had a memorable quote after the game when he quoted Will Ferrell’s character, Ricky Bobby, from the 2006 comedy ‘Talladega Nights: The Ballad of Ricky Bobby” by saying the famous motto “if you’re not first you’re last.”

I wonder if Paul remembers the ending of the movie when Ricky Bobby’s daddy told him that it was stupid advice because he was high when he said it.