On this date in history, April 24th of 1994, David Robinson won the NBA scoring title by beating Shaq’s scoring average by .5 points.

Going into the final game of the season, Shaq said he couldn’t care less about the title. He ended up putting up a casual 32 points and 22 rebounds against the Nets — a team he has a history of destroying (literally). Those numbers sound pretty gaudy until you hear David Robinson scored 71 (19 more than his previous career-high and 8 more than the previous franchise-high set by George Gervin) against the God-awful Clippers.

“It was unbelievable,” Said Robinson. “My team has been behind me the whole year. They always push me to do a lot of individual things. As a leader, I just try to win games, but tonight they really wanted me to shoot it. When the game started, they were looking for me almost every time down the court.”

You can blame the Clippers, who did double and triple team the Admiral at times, for “allowing” him to join Baylor, David Thompson, and Wilt as the only players in history to score 70+ points, but the man who deserves the most blame (or credit) is Spurs coach John Lucas. Up by over 20 with a minute left in the game, Lucas instructed his players to foul the opposing team so Robinson could get a few more shots up. Robinson scored 7 more points in the final minute to give him 71 on 41 field goal and 25 free throw attempts.

When Magic coach Brian Hill heard the news, he called it a “mockery of the game.”

Disgruntled Clippers forward Dominique Wilkins, who knows a thing or two about fighting for scoring titles, felt the same way as Hill.

“Disappointing is an understatement for this season,” Wilkins said via the LA Times. “There’s no pride here. If you can look at yourself in the mirror after a game like that and be happy with yourself, something’s wrong. Nothing against David, he’s a great player, but how can you let a guy get 71 points?

“I think it’s ridiculous. We helped him get 71 points. If they want to play him the whole game that’s fine, but the way we played him, it’s like we helped him.

“I’ve never seen anything like this in my career, let me tell you the truth, never.

“That game probably got him MVP.”

Equally disgruntled Clippers vet Mark Jackson also went off on his team after the game.

“If you are not committed to winning, I don’t want to be here. And I think tonight shows no commitment towards winning.”

As for Shaq: “That meant I was on his mind. They ran every play for him. If I hadn’t been triple-teamed and was selfish and tried to score every time I touched the ball, I could have scored 70, too.”

No surprise, the Spurs coach felt Robinson earned every one of those points.

Unfortunately for Lucas and Robinson, the Utah Jazz were a little better than the Clippers and beat the Spurs 3-1 in the first round of the playoffs. As for Robinson, he scored just 9 more points in the whole series than he did in just his final regular season game. Not everybody seems to care about a scoring title as much as Robinson. This is what Kevin Durant posted on the final game of a season when he was up for the scoring title. Click here to read about the closest scoring battles in NBA history. 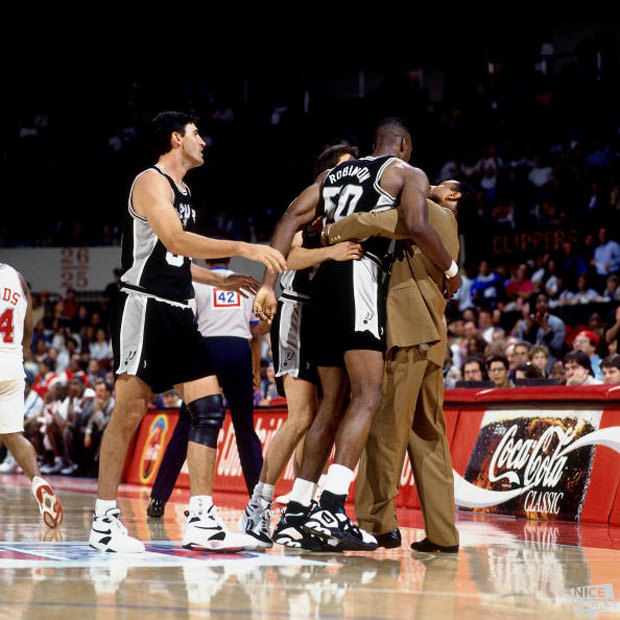