I’m so confused. I just came across this video of 6-10, 12-year-old Oliver Rioux of the Frenchy Phenoms dominating a bunch of kids half his height. I’m shocked about his height — two inches taller than Shaq was at age 13 — but I’m confused about the height of the rims. 8-foot rims? Why are they playing on low rims?

A few NBA players were wondering the same thing: Steph Curry posted “So many questions….” on House of Highlights. Nate Robinson asked why are they “playing on baby hoops” and Joel Embiid said, “He has the nerves, the audacity to talk shit too lmao.”

What I find even more confusing is how his team can actually lose a game when he’s capable of dunking without jumping. Seriously, they lost 90-89 in the below video. I can’t find the stats for the game and don’t care to watch the entire thing but I’m going to be disappointed if Rioux didn’t put up Wilt Chamberlain 1961 numbers. If he didn’t, I’m just going to assume he’s not demanding the ball or Tyronn Lue is coaching.

Just to be clear, I’m not criticizing the kid. I’m actually impressed with his ability to dribble for being as tall as he is at the age of 12. I’m just shocked that his team lost, especially since they are playing on “baby goals.”

At least Rioux actually looks like a kid, unlike Greg Oden during his middle school days. Here’s a photo of Greg in junior high (right before he turned… 21?). 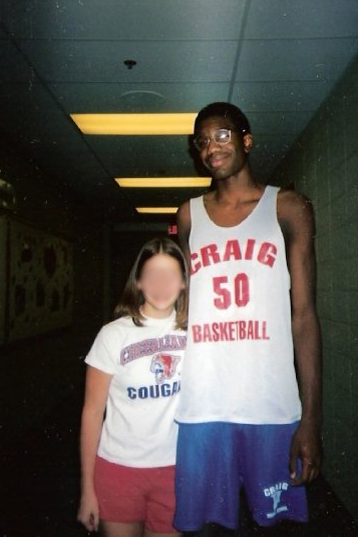