What did you think about Connor Toole going to the Utah Jazz.  Who? You know, Connor the 6’10 power forward from…somewhere.

The reason why the name isn’t ringing a bell is because he wasn’t drafted last night, but that didn’t stop him from pretending he was and celebrating with a bunch of gullible fans who just want to mingle and get a little personal with a NBA player – any NBA player.

Connor is a humor writer for The Elite Daily and to “test his theory” that he could easily convince people he was a future NBA player he put on a suit, a Jazz hat and hung around the arena for congrats, selfies, free drinks and phone numbers from thirsty women.

As crazy as this video might seem to some of you, I can give you a hundred stories about streetballers who couldn’t make the NBA but were doing a good job of impersonating Wilt Chamberlain by saying they were to gullible women in bars, clubs and even hotel elevators.  I even have a 6’8 friend who is a photographer and occasionally uses the “i’m with the Rockets but they have me in the D-League right now, but don’t worry, i’ll be collecting dimes to James Harden next week.” And with that silly lie, he’s collecting dimes off the court. 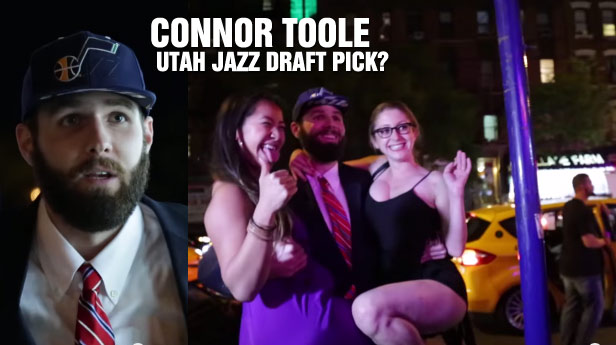