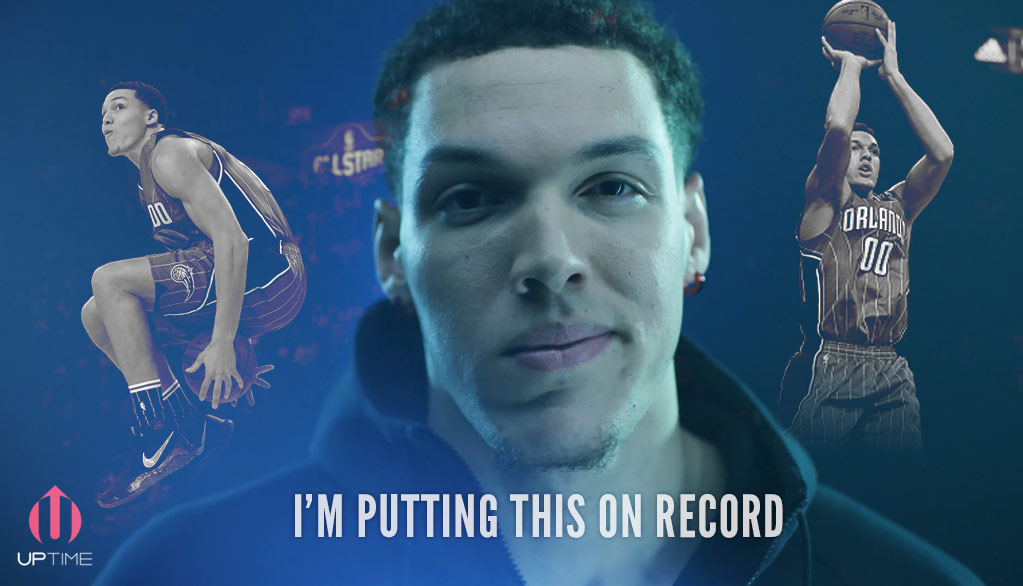 About seven hours before the start of the 2017 NBA the dunk contest, I had a conversation with Aaron Gordon about his new partnership with Uptime Energy drinks, some crazy online rumors, the inspirations for his game and how his game is evolving.

That crazy online rumor was one that involved “Gordon dunking over himself” or a “clone” because he reportedly has been seen visiting the Roslin Institute in Edinburgh, Scotland (Scotland?!) where a sheep was once cloned. After a long pause, I repeated the wild rumor and Gordon replied, “You are going to laugh when you see the dunk contest later.”  The response left me excited and more confused than I was before asking.

I also asked him about a possible Vince Carter cameo in his routine since the 2000 dunk champ was featured, as Yoda, on a Star Wars-inspired Orlando Magic poster titled “Dunk Gordon Strikes Back.”

The poster was one of three amusing movie themed posters: the other two were “Back To The Dunk Contest” and “Captain AG: Return Of The Dunk.” He said “The Back To The Future” poster was his favorite and unfortunately dunk God Carter, one of his dunk idols, would not be a part of his 2017 routine.

Besides Vince, who is also on the top of almost every high-flyer’s idol list, the 21-year old named two surprising things that made him want to take the art of dunking to a new level: The And 1 Mixtape Streetball Tour from the early 00s and the 2001 video game “NBA Street.”

The And 1 Tour introduced Gordon and his brother Drew, who was also going to compete in a dunk contest on the same night over in Lithuania, to the aerial exploits of Taurian Fontenette aka Air Up There aka Mr 720. Gordon admitted he’s never been able to pull off the 720 dunk, which was executed when Gordon was just 10 years old, but does believe someone will do it again.

Cult classic “NBA Street” introduced him to fantasy dunks like the honeydip, krunk junk, super fly and two scoops with sprinkles. The freestyle action of the two throwbacks also inspired Gordon to work on his underrated handles, which has broken many ankles during his prep days, kid’s camps and in the San-Fran Pro-Am games over the past couple of summers, but hasn’t really been showcased in the league since being drafted by the Magic.

Another aspect of his game that doesn’t get talked about much is his 3-point shooting. He’s taking (3.4) and making (1) a career-high per game this season and in his career-high game of 33 points against Blake Griffin (Gordon was known as Baby Blake and The Next Blake Griffin in high school) and the Clippers, he knocked down a career-high four. He also had two other games within a month’s span tying his his 3-point career-high, including a game against the Grizzlies when he was a perfect four of four.

When asked if he wouldn’t mind competing in the NBA Skills Challenge, he quickly replied with a “Yes” and said, “I want to be in the 3-Point contest. I’m putting this on record.”

His bold guarantee of being able to compete with the league’s best in the shootout caught me off guard but I love his confidence and I’ve always been a believer in his game so I thought why not. Why can’t Gordon become the first Dunk and 3-Point Contest winner? Well, unfortunately things didn’t go so well for Gordon later that night and after a disappointing first round exit, Gordon said he would not be returning for a third try at the dunk trophy.

So, my question now is, “Will the next time Gordon be at All-Star weekend be for a Saturday or Sunday event?”

Shout out to Uptime Energy for the time and for believing in Gordon as much as I do.