Adidas has just released Damian Lillard Rookie of the Year edition Real Deal basketball shoe. The memorable shoe from the late 90s is back in a limited edition version designed to commemorate Damian’s amazing ROY season.

The shoe’s sockliners feature Damian’s Twitter handle, an Oakland satellite print and “9800s” to represent his neighborhood blocks. The colors of the shoe pay homage to his career; red for high school, purple for college and black for the Portland Trail Blazers. The animal print on the upper and sockliner represent the Wildcat mascot he had in both high school and college. The shoe features “Townbiz” on the upper as another nod to Oakland and clasped hands to represent the “Fly Guyz” – Damian’s name for his close circle of friends.

Only 510 pairs of this limited edition will available on May 23 for $120 at Compound (Portland, Ore), Shoe Palace (Oakland, Calif.) and adidas.com. Fans can pre-order a pair today at adidas.com or join Damian at Compound on May 23 between 6:00pm and 7:00pm for the official launch and a chance to meet the Rookie of the Year and get an autograph. 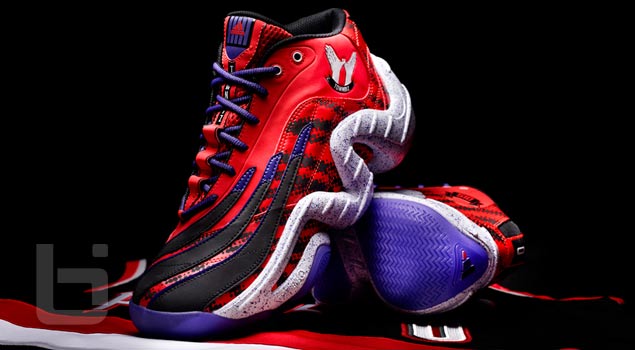