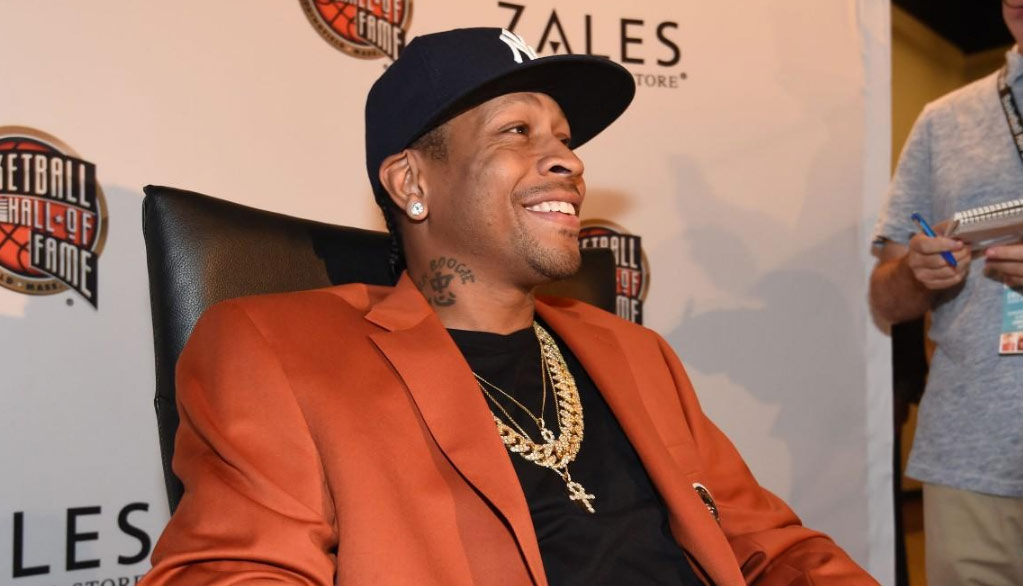 During his playing days, it was expected that Allen Iverson would show up late to commercial shoots, interviews and appearances. And once he did show, if he showed, you had no idea how long he would be there and it was a given that he would remind you why you love him or love to hate him so much.

On Thursday, Iverson, wearing his trademark Yankees cap and a bunch of gold and diamond necklaces, showed up around 3:30 pm for the Hall of Fame jacket presentation in Springfield; 30 minutes after the event ended and 90 minutes after it started.

Shaq on AI: "I don't know how you miss this…I'm supposed to be a franchise player & we talking about the Hall of Fame?!?" #hoophall16

Yao Ming also joked that Iverson must be at practice; a joke that Iverson hates and was once again brought up by Shaq during a later Q&A with the 3 icons.

When it was time for the inductees to speak with reporters, the first question asked to Iverson was, “Did you have travel problems?”  An annoyed looking Iverson mumbled, “personal situation…family.” Then after looking away and shaking hands with another reporter, an energized Iverson turns back to the reporter and says with a smile, “That’s the first thing you want to know about me? God man. Why I can’t just be great?”

As expected, the emotional Iverson went from cracking jokes to trying to hold back tears as he talked about the coaches and teammates who helped him get to where he is right  now.

And the best, most Iverson answer Iverson gave during the day came when ESPN’s J.A. Adande asked him about being comfortable being Allen Iverson.

“But it was never no problem with me being who I am and being the person that I am. Like, I love my daughters and my sons being who they are and feeling good and comfortable about who they are. I love my kids loving the fact that their daddy is their daddy. Now, they’re at that age now where hey can read the newspaper, and they can read old articles and go to YouTube and look at old things that happened in my life. And I’m not ashamed. I’m not going to apologize for it. Those are mistakes that I made in my life, just like the mistakes that they’re going to make in theirs. I won’t judge ’em. I’ll always love them for who they are.

“I was always just cool with who I am. Why not? That’s disrespect to my mom and my dad, the people that raised me, for me to have a problem with me, trying to be somebody else that I’m not. I’m cool with the person they raised. I’m cool with that.”