After the event, I spoke to PennyCCW — real name Penny Chan — about his 21-year journey of being an Iverson fan and his journey from Hong Kong to the US this past weekend. 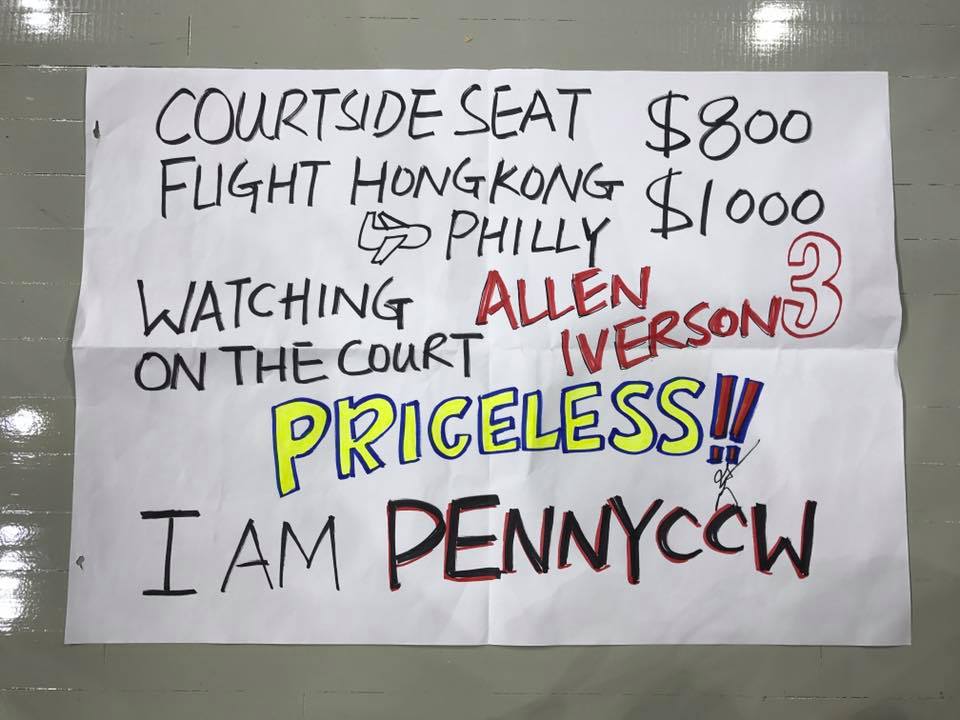 When did you become an Allen Iverson fan?

I have been an AI fan since 1996 when I accidentally read a local magazine named ROCK, in which there is a column introducing AI when he was playing for Georgetown. Then I started collecting his trading cards and watching his video highlights. Since then, over 20 years, I never lost my love for AI!

When did you start the PennyCCW account and how do you acquire all the footage?

I was actually making VHS video highlights from one VCR recorder to another one by recording NBA games from TV broadcasts in Hong Kong. But most of my footage is from USA guys selling NBA game on DVDs. In 2006, I realized there was a video uploading platform, Youtube, then I started sharing my AI videos highlight there.  As I am named Penny Chan Chiu Wai, I made my YouTube pennyccw and that’s how pennyccw was born.

What’s your Top 5 favorite videos of him?

Practice? You talking about practice? Oh, that’s not among my favorite videos because I think the mass media twitched the post game conference into a bad way. So, here is my top 5 favorite videos on YouTube:

GAME 1 OF THE NBA FINALS

HIS HALL OF FAME SPEECH

Last but not least, I will be making a video of me coming to Philly searching for The Answer and that will probably crash into my top 5 most favorite videos of all time!

When did you plan on going to the US to attend the Big3 game?

I made this decision back in May when The BIG3 released their schedule. It was always a dream of mine since 1996 to watch AI play on the court in Philadelphia. I have watched AI play in China before but that would be a complete different story if I came to the states. Therefore, I came here to meet some crazy loyal AI fans in Hong Kong and getting the first row courtside seats. I spent nearly 30 hours travelling to Philly, which was harsh but I really dreamed of watching AI live and in person!

Did you get a chance to speak with him and did he know who you were?

I really wanted to tell him I am the guy who keeps sharing AI games videos to YouTube. but when I met AI on the court, I was just speechless! I just said, “Yo AI, I love you man!” The feeling was great. 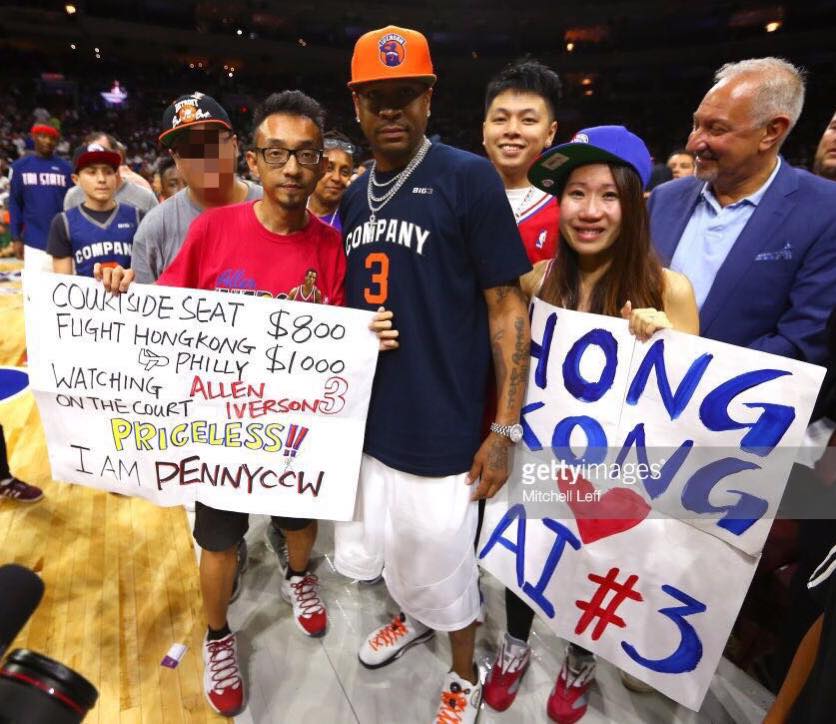 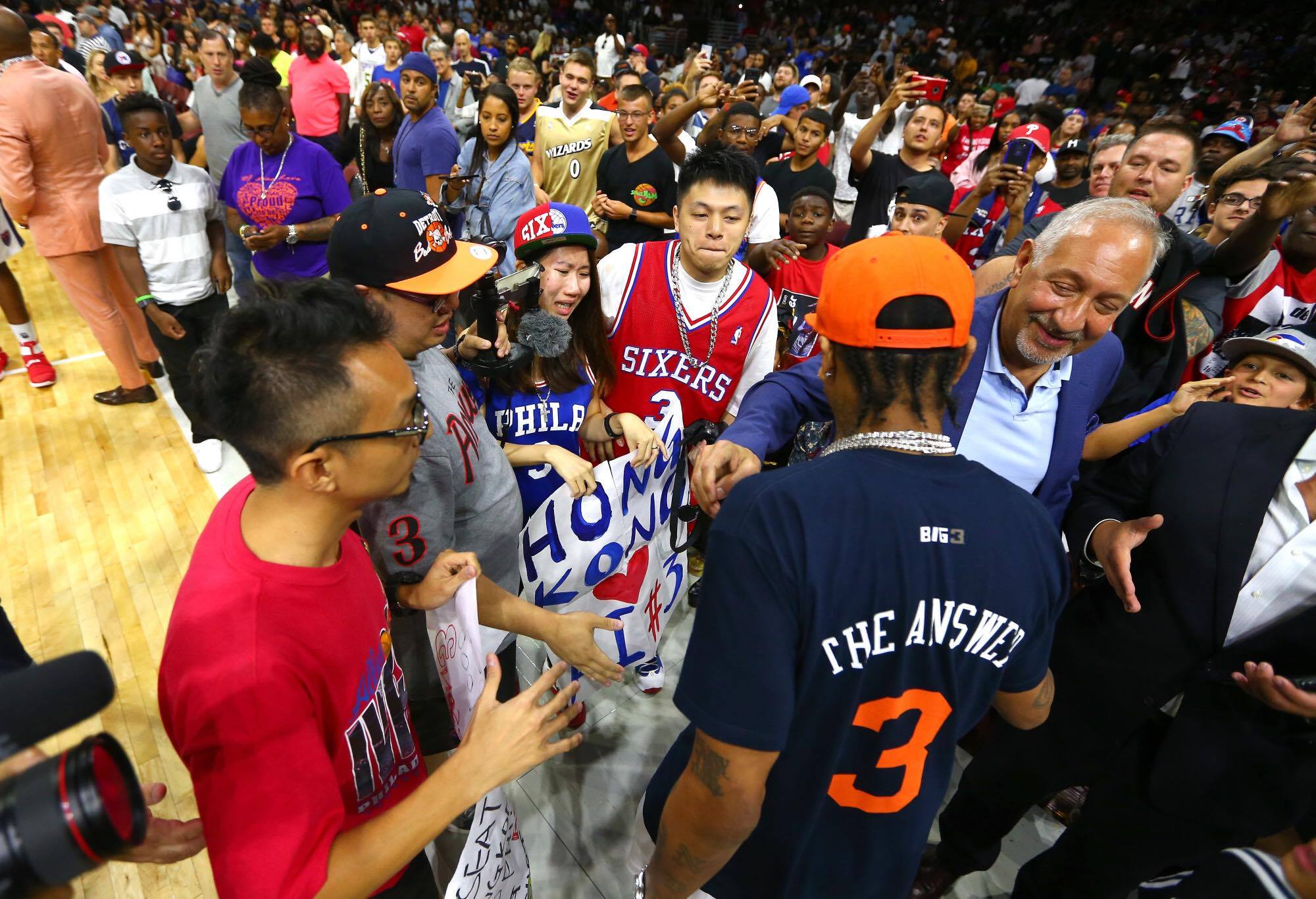 Were you disappointed he didn’t play in the game?

At the beginning I was disappointed. But when he was introduced to the crowd, the atmosphere was so hyped up, I was able to come close to AI, show him the banner and have a hi-five and a hug with him. Then the media turned us around and took a group picture with AI and my friends and that is more than just watching him on the court. As my banner said, this moment is priceless! We all understood that if he was going to play the game, he would have been warming up and we would have had no chancs to come close to him. So I’m not disappointed at all right now. I’m still living in my dream!

And finally I would like to take this chance to thanks my beautiful wife, who gives ultimate support to me to pursue my dream by letting me coming to the US alone. Many of my friends texted me to congratulate me meeting AI and I took a pic together because they knew how much I love AI. I would also like to let all AI fans know that I will keep sharing AI news and videos to keep AI’s legacy at a high level. I was a little bit surprised when people spotted me and shouted “penny ccw” to me when I was watching the game yesterday. It proves that hard work pays off. And my last statement to all of you : Show me the fool, who says, dream won’t come true! 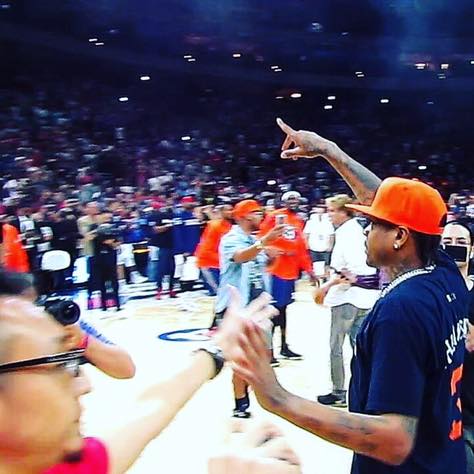