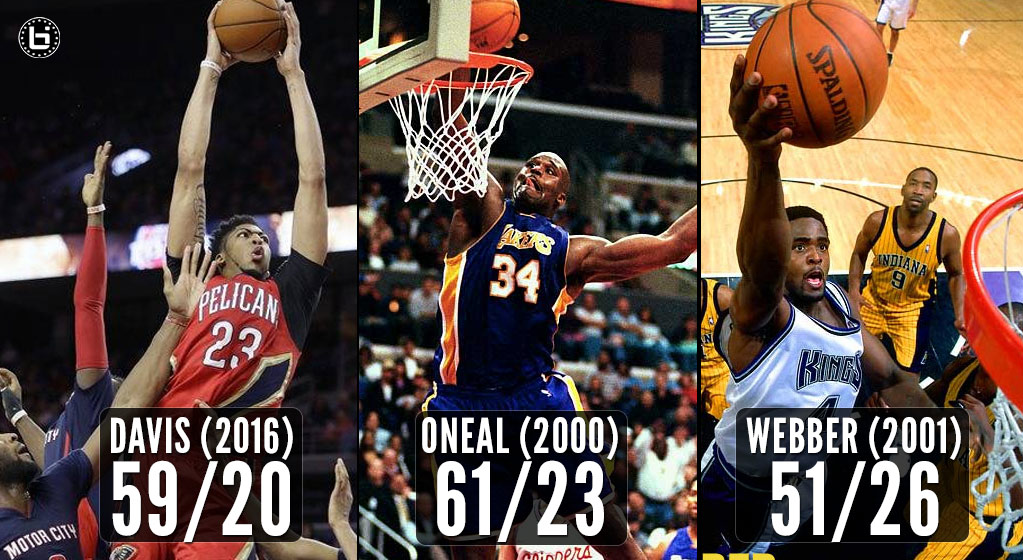 “I don’t think it will really sink in until tomorrow what I did today,” Davis said. “But being in the history books with C-Webb and Shaq? That’s something special.”

What made AD’s game so unique compared to the others is he was making shots from downtown (2-2) and was money from the free throw line (9-10).

“That was a lot of fun, because the rim looked so big that it felt like everything I shot was going to go in,” Davis said. “I wasn’t keeping track of my point total, but the guys were telling me at the timeouts. They wanted me to get 60.”

STAT LINE: 61 points, 23 rebounds, 3 assists (24-35 fg, 13-22 ft)
DID HIS TEAM WIN: Yes, by 20 points.
WHY IT WAS SPECIAL: In 19 years, Shaq averaged 29 & 11 on his birthday and this was his best birthday performance. Not just because of the huge numbers and definitely not because it happened against the Clippers, but because it  happened during his MVP and first championship season. It was also extra sweet because Shaq was offended when he saw Kareem Abdul-Jabbar giving Michael Olowkandi “tips of stopping Shaq” before the game.
HOW DID HE DO IN THE FOLLOWING GAME: sd
SEASON AVERAGE: 29.7pts, 13.6rebs, 3.8asts, 0.5stls, 3blks