Where do we start? I thought about starting back in the 2003 NBA Draft, when the Miami Heat made the decision to select the third best shooting guard of all-time with the No. five pick. But you know the story. You know all about how Dwyane Wade became a 12-time All-Star, had one of the greatest NBA Finals performances of all-time in 2006 and how he won two more rings with fellow Banana boat rider LeBron James in 2012 and 2013. So let’s just flashback to last night, when the 36-year old Wade turned back the hands of time and became Flash again.

Written on Wade’s shoes was the name Joaquin Oliver, the 17-year old shooting victim who died in Parkland and was buried in a Wade jersey. With these shoes on and his Mom and sister in attendance, Wade — who is dedicating the rest of the season to Oliver — scored 15 of the Heat’s final 17 points against the 76ers and knocked down a game-winner that generated some great reactions from around the league, especially from his wife Gabrielle Union and friend LeBron James.

“That’s my muthafucka right there!” – Said Gabrielle Union on Twitter.

“There’s something about Dwyane Wade when you put that Miami Heat jersey on and play in front of these fans,” Heat coach Erik Spoelstra said. “He becomes somebody very special.”

Here’s what the very special D. Wade had to say on his Instagram account after the emotional win.

Soooooo this happened tonite…Great team win!!! Thankful for my support system for the belief and the confidence. That’s my Teammates, Coaches, family and friends!!! Joaquin Oliver and Henry Thomas thanks for being my angels tonite. #wegotmoreworktodo 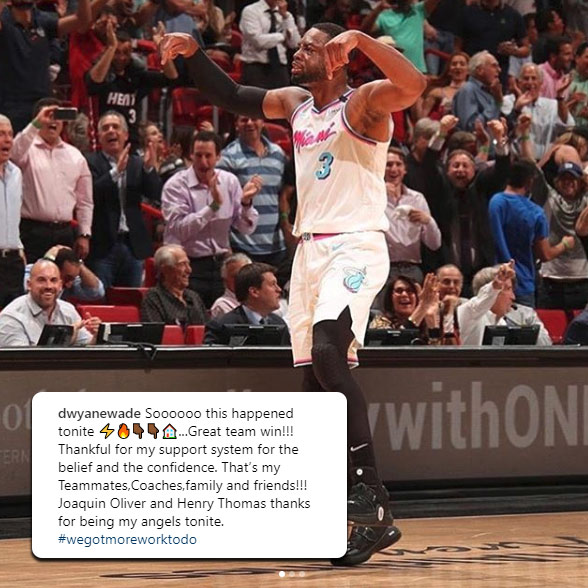