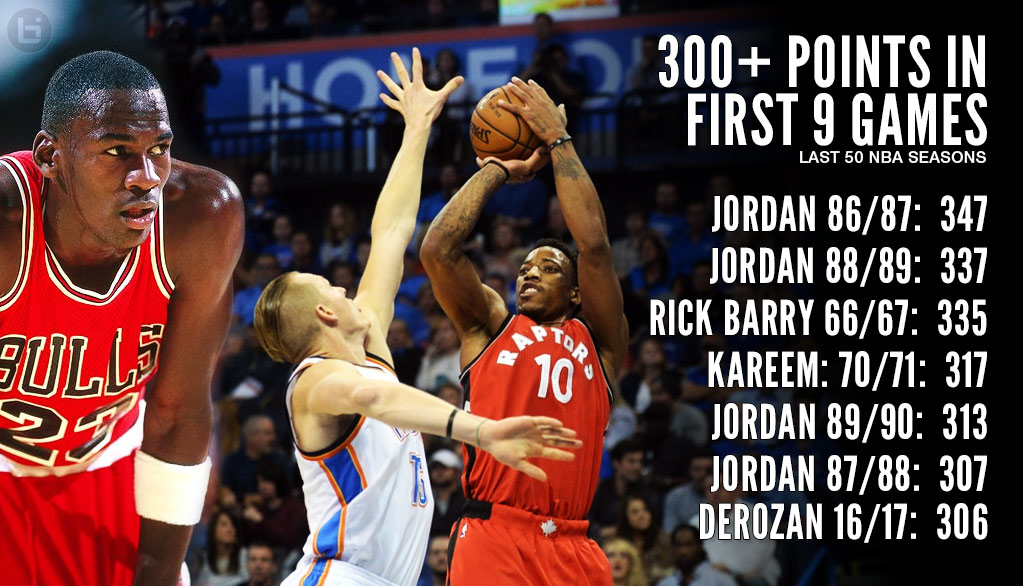 Out of all of the ridiculous max deals signed this past summer, very few complained about DeMar DeRozan and his $139 million deal. And after the Raptors first nine games of this season, I’m pretty sure those few are willing to take back anything they said and personally write and hand deliver an apology letter to the Raptors’ All-Star.

DeRozan has been on a record-breaking scoring rampage and currently leading the league in scoring with 34.1 points per game (three more than 2nd place Anthony Davis). He also has 30+ in eight of the nine games and the last person to do that was Michael Jordan 30 years ago. His Airness, Kareem Abdul-Jabbar and Rick Barry are also the only players in the last 50 years to score more points (306) after nine games; Micheal did do it four times but still, only three players are on this list.

As impressive as DeRozan’s scoring streak has been, the most impressive thing about it is he’s shooting a career-best .528 from the field, especially since he shot below .500 in his first seven seasons in the league. In the two 40+ games during the streak, DeRozan shot over .600 (.609 and .630) and he was 13 of 22 in his 37 point performance.

My favorite two stats about how DeRozan is racking up his points is he’s attempting a career-high 10 shots from the line, making 8.1 and still shooting over 80%, and only attempting 1.6 3-pointers a game; Anthony Davis is even attempting more 3s than DeRozan and he’s a power forward! #3 scorer Russell Westbrook is attempting 6.3 a game and #4 scorer Damian Lillard is launching 7.3 a game.

And maybe the most important stat about this scoring streak is the Raptors are tied with the Hawks for 2nd place in the Eastern Conference with a 7-2 record.

So can DeRozan keep this up and finish the year averaging near the 37.1 Jordan averaged in 86/87? Most likely (hell) no. Can DeRozan finish the year as the league’s best scorer on the biggest threat to the Cavs in the East? I don’t see why not.