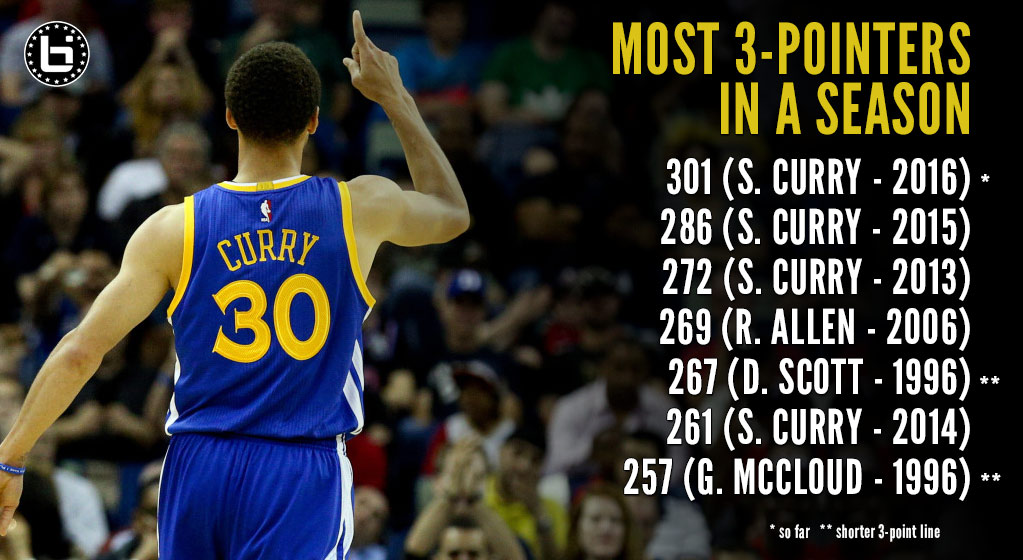 On April 8th of 2015, it was déjà vu, during the 2nd quarter of a win against the Portland Trailblazers, Steph Curry broke his 2013 record with his 5th 3 of the night. He finished the game with 45 points and 8 3-pointers. He finished the season with 14 more 3s – 286 total. A total which seemed impossible to break since it’s 17 more than any other player (Ray Allen) in NBA history and 43 more than the 2nd highest total (243 by Jason Richardson) not by Curry or a player during the mid 90s, when the 3-point line was shorter.

On March 7th of 2016, Steph Curry connected on 7 3-pointers, breaking his unbreakable record and becoming the first player in NBA history to make 300 3-pointers in a season.

“It’s special and it’s never been done before in history.” said Curry, who finished the game with 41 points and 13 rebounds in a win against the Orlando Magic. “So I’m blessed to have been healthy, playing night in, night out, to have that kind of consistency and try and shoot the ball at a high level.”

It’s so special, Curry has a hard time believing he actually pulled it off.

“Years ago, when I broke the record the first time, reaching 300 seemed crazy. It’s still kind of surreal to have accomplished that knowing I love to shoot the ball and try to do it at a high level.”

Here’s a few other great All-Star shooters and their career best 3-point totals.

Curry is averaging 5.1 3s a game this season and with 20 games left on the schedule, he’s on pace to make 400!  Can he pull it off? Unlikely, since the Warriors will probably rest him a few games and there’s always those mild injury night offs but then again, they are chasing that Bulls record and we are talking about the greatest shooter of all-time!