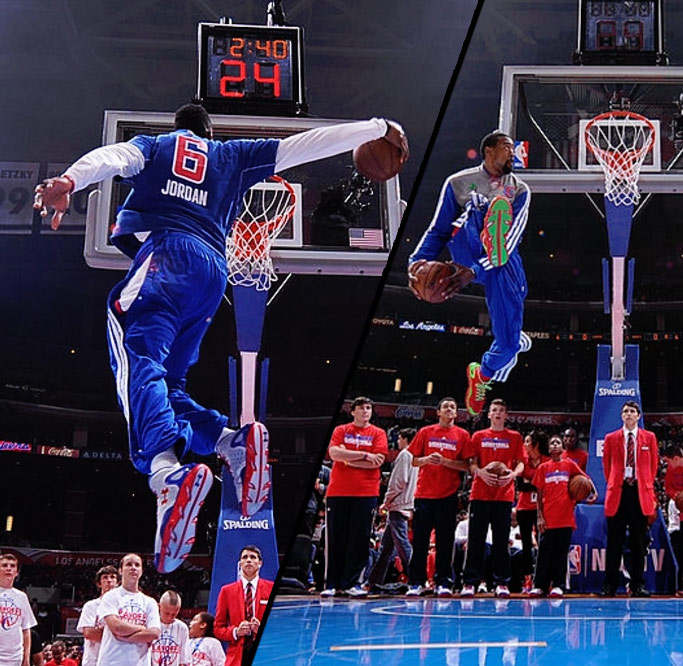 With back-to-back NBA dunk contest champ Zach LaVine declining an invite to go for a three-Peat, the NBA has been doing their best to add some star power to a pool with the following non-household names: Aaron Gordon, Jonathon Simmons, Glen Robinson III and Derrick Jones Jr. Enter NBA All-Star DeAndre Jordan. Once again, the Clippers’ big man is pondering the invite and even (jokingly?) said he wouldn’t mind doing a few other events on All-Star Saturday night.

DJ said he's currently trying to negotiate his way into the 3-Point Shootout or Skills Challenge if he's going to do the dunk contest.

Even if the NBA just invited the Chicago Bulls backcourt, Jordan would still have no chance at winning the 3-Point Contest but the real question is, “Can the 6’11 Jordan actually win the NBA dunk contest?”

In general, tall guys don’t do well in the event. Yes I know 6’10 Larry Nance won it in 1984 but do you remember what the 6’10 Mason Plumlee did two years ago? What about the 6’11 Greek Freak?  Probably not.  But, I’m believer in tall guys. I thought JaVale McGee was robbed when he lost to Jordan’s teammate 6’10 Blake Griffin in 2011. And, I believe DeAndre Jordan is more athletic and skilled at dunking than McGee; this collection of pre-game dunks should also make you believer.

The majority of the league’s so-called high-flyers can’t even do a 360 windmill or 360 between the legs dunk and Jordan was casually throwing them down in his warm-up suit before a game. Combine that athleticism with his sense of humor and I’m pretty sure he will be able to come up with a handful of creative dunks to make him a serious contender. Just think Dwight Howad in 2008 with a more likable personality.

I also have a guarantee 50 for him. Remix the infamous RIP dunk on Brandon Knight with some guy wearing a Knight jersey and then have a little kid wearing a Lion King Simba costume check on the lifeless body. Once little Dough boy says “y’all wanna see a dead body?” his body is carried off in a coffin. I know it’s a little dark but it’s a 50 if I’ve ever seen one and would turn into viral gold.