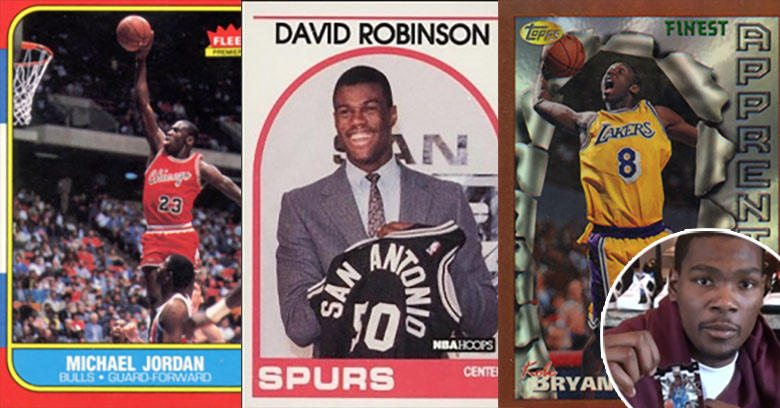 You aren’t going to come across a bigger basketball card collector than me. I’ve been an avid collector since the now defunct company Hoops made it’s debut in 1989 and had the card industry going crazy over a David Robinson rookie. I was spending lunch money in 92 trying to get redemption cards for Shaq’s NBA rookie because another defunct company, Classic, signed Shaq to an unheard of million dollar exclusive deal, which prevented competitors (Fleer, Hoops, Topps & Upper Deck) from making a Shaq card until 1993.  Years later, I was spending half of my McDonalds paycheck on Kevin Garnett and Kobe Bryant rookie cards from new premium product lines in the mid to late 90s. Then during the time of Vinsanity and memorabilia cards, I started to buy less of the new (and much, much more expensive) products and more of the expensive vintage stuff from 1986 (Jordan’s rookie year) and before.

During my vintage treasure hunting days on Ebays, one by one, all of those card companies that helped make my childhood fun were going out of business, losing licenses or getting out of the industry for one reason or another. The same goes for the local Sports Card shop and card shows in Malls.

Then in 2009, Panini – a company that used to make mini-NBA stickers in the 90s – came along, acquired a NBA license and became the only game in town.  In 2011, they landed Kevin Duarnt as a spokesman. A year later they signed a new deal with the league and 4 years after that (this week) they are announcing a new type of deal. A deal that will allow Kevin Durant to become the “Global NBA Spokesman” for the brand.

“Kevin has a passion and an understanding of our business and how it translates to engaging NBA and KD fans—whether you are collecting Panini trading cards or want to get autographed memorabilia of Kevin from Panini Authentic,” says Jason Howarth, Panini America’s VP of Marketing. “We’ve seen his level of interest grow from when he first joined Panini to understanding what we do, how we do it and want to be a part of that. As we move forward with the new partnership we’re excited to have the opportunity to get feedback and even encourage his creativity on designing trading cards or creating unique memorabilia items for his fans.”

As part of the new deal, the brand also released this cool but pretty damn dark video called “Simon Says.”

Regardless of what Simon says, the adult in me says it’s going to be a big challenge to get a young demographic back into the hobby I grew up loving. But the kid in me says “I can’t wait to rip open another pack” and I really would like to see more people discover how cool it is to open a pack and pull out an autograph of Kevin Durant or another LeBron card which you are going to trade for a Steph Curry one.

Back to adult business, I have a very rare box of 1986 Fleer basketball cards. Each box contains 2 to 3 Michael Jordan rookie cards and if you pull one worthy of a PSA 10 grade then you are sitting on a $20k card.  I’m willing to let go of the box for $30k.  Sounds crazy?  There’s people selling empty boxes – as in just the box with no cards or packs in it – on Ebay for $50.