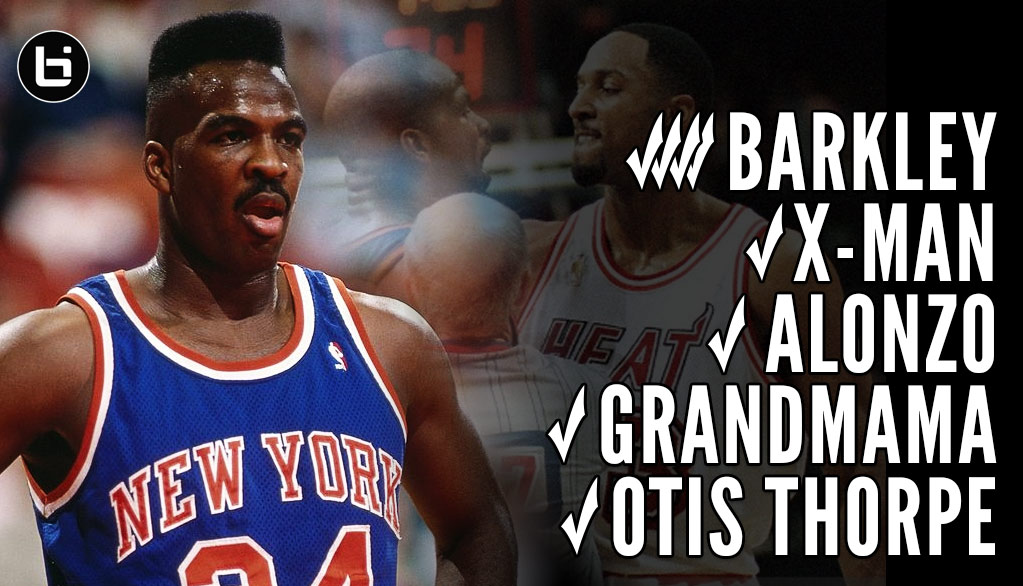 When you think of players and goons the average player in the 80s and 90s feared and/or wanted nothing to do with, you will get names like Xavier McDaniel, Otis Thorpe, Charles Barkley, Larry Johnson, Alonzo Mourning and maybe Rick Mahorn. Those are also just a few of the names of guys who tangled with Charles Oakley in games. The reason why I said “in games” is because players weren’t safe from Oakley during practices and shootarounds either — just ask Jeff McInnis, who was slapped by Oakley during one.

Here’s my list of the top 12+ fights and scuffles with Charles Oakley…that I’m aware of or allowed to discuss. And before I get into these, I have to share a semi-pointless but amusing story from All-Star weekend in New York a couple of years ago. I’m standing outside in the freezing cold and I see a tall black guy wearing an all-white suit and white sneakers walking down the street with two short white guys that looked like extras from Goodfellas. You can guess who the black guy was and yes, I was afraid to say what’s up to him because I was afraid I was going to get whacked by one of his two Mafia-looking henchmen. We ended up meeting in the summer of 2017 and after asking him about oversensitive people on the internet criticizing him for saying “some current NBA players play like girls,” I was afraid the conversation was going to end with me getting slapped the way he slapped Charles Barkley during an NBA lockout meeting.

YEAR: 1996
RESULT: $11,000 fine and 2-game suspension
QUOTE (OAKLEY): He’s been doing lots wrong his whole career and it doesn’t seem to matter. He has spit on people. They don’t care.

YEAR: 1989
RESULT: $7,500 and 1-game suspension
QUOTE (NBA VP ROD THORN): We’re very serious about curbing fights. We don’t think fighting adds anything to the N.B.A. Our feelings are that heavy fines and/or suspensions will act as a deterrent against violence. We are now fining players for throwing punches, whether they land or not. We’ll do anything we have to in order to curb violence.

YEAR: 1987
RESULT: Don’t know but Mokeski was taken to the hospital

YEAR: 1988
RESULT: $2,000 fine for
QUOTE (OAKLEY): If they do something wrong, they`re going to get checked. No matter what player they mess with, somebody will retaliate. In Detroit earlier this year, Bill Laimbeer hit Scottie. I ran out and told him the next time it happens, something is going down. 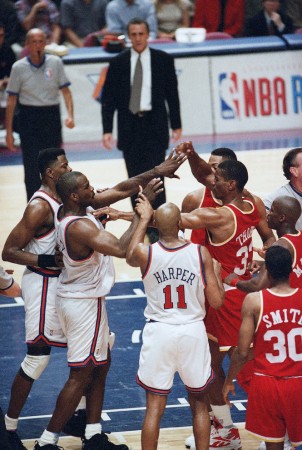 YEAR: 1997
RESULT: $7,500 and 1-game suspension
QUOTE (ROD THORN): He definitely hit him. He initiated the altercation with the flagrant foul. Thorpe then retaliated with an elbow to his chest and then Oakley hit him in the face.

4/3/01: The NBA fined Charles Oakley (Tor) $10,000 and suspended him for 1 game for throwing a ball at Tyrone Hill after Tuesday’s morning shootaround. The reason? Hill owed Oakley a reported $54,000 but since Hill didn’t pay quick enough, Oakley wanted interest.

“A gentleman pays his debt within a week or two,” Oakley said, adding that it’s a “coward move” for Hill to say he paid him.

1/16/00: The NBA fined Charles Oakley (Tor) $7,500 and suspended him for 1 game for failing to leave the court in a timely manner following his ejection from the Tor-Mil game and for extreme unsportsmanlike conduct.