Chino Hills won its 44th consecutive game Saturday night, 87-77, against Bishop O’Dowd at the Tarkanian Classic. Both teams played hard all game long and O’Dowd looked like it had the Huskies all figured out but Eli Scott, LaMelo Ball and company responded in a big way by attacking the rim instead of relying on threes. Chino Hills can win in many ways and showed it doesn’t just live and die by the 3-point shot.

Chino Hills (Calif.) has been able to win 44 games in a row in a variety of ways. For 35 of them, of course, the Huskies had the dynamic Lonzo Ball, the 2016 Mr. Basketball USA who is now one of college basketball’s best players at UCLA. But the team is not all flash and dash or the production of the remaining Ball brothers on the team — UCLA-bound forward Li’Angelo Ball and sophomore point guard La’Melo Ball.

The Ball brothers put up points and have experience, but the contributions of LMU-bound Eli Scott and sophomore big man Onyeka Okongwu cannot be underestimated. That was clearly evident in the Huskies’ 87-77 Tarkanian Classic championship quarterfinal victory over Bishop O’Dowd (Oakland, Calif.).

Against arguably the best team in Northern California, the difference was the fabulous board work of Scott and the patience and timely baskets of Okongwu, who also did a good job of limiting the big O’Dowd big man Raymond Hawkins offensively. Scott finished with 21 points and grabbed 19 rebounds, many of them in critical moments when Bishop O’Dowd (1-2) was threatening and finished off the game with a monster alley-oop dunk. Okongwu didn’t much offensive touches early, but he hit two clutch jumpers down the stretch and finished with 12 points, 15 rebounds, and three blocks.

The contributions of Phaquan Davis, a 5-foot-10 sophomore, were big as well. He hit a big 3-pointer to make the score 61-53 and had two big steals in the closing minutes when Chino Hills’ trap slowed down the Dragons.

Melo and Gelo combined for 42 points, making 15-of-45 field goal attempts. They take a high volume, but because of the stamina and knowledge of knowing the personnel, Chino Hills gets to a lot of offensive rebounds and the players who don’t get many attempts never get frustrated and never let up on defense. Their winning streak is a total team effort.

As for O’Dowd, it is one of the few teams in the state not intimidated around the rim by Chino Hills and showed it is a bonafide contender to represent Northern California in the CIF Open Division state title game for the second time in two years. Naseem Gaskin, a 6-foot-4 junior, played terrific against Chino Hills, showing off a full offensive arsenal. He finished 10-of-20 from the field with 21 points. His backcourt running mate, 6-foot-1 junior Elijah Hardy, keeps improving his pull up game and playing under control. He finished with 19 points on 9-of-23 shooting.

The Huskies have proved they can win in a variety of ways, but still have a ways to go before breaking any CIF Southern Section or CIF state records. With two more victories, however, they will go down in the annals of the Cal-Hi Sports State Record Book with one of the longest winning streaks in California history.

The cut off is 46 consecutive wins, which Chino Hills, currently 9-0, can reach by wining the Tarkanian Classic on Tuesday evening at Bishop Gorman.

Both the CIF Southern Section and CIF state record are held by Compton High School, which won 66 consecutive games between 1967 and 1969. Similar to Chino Hills, the Tarbabes also won a mythical national championship; in fact, Bill Armstrong’s program won two consecutive for the 1967-68 and and 1968-69 seasons, according to the National Sports News Service, which is the precursor to the weekly FAB 50 National Team Rankings. 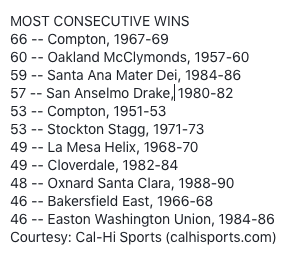 Compton’s 1967-68 team, led by future UCLA small forward Larry Hollyfield, is considered one of the deepest and best teams in California history. Lonzo Ball is going down as a great winner and still hasn’t lost a game yet at UCLA, but Hollyfield’s winning resume is unmatched. In six seasons between Compton High, one at Compton College and three at UCLA, Hollyfield went an incredible 184-1, only losing one game at UCLA to Notre Dame.

Shop at our online store:
http://shop.ballislife.com