On Wednesday night, Chris Paul took over the third quarter against the Detroit Pistons and put on a show for his fans and one special fan in particular: 13-year old Jack Gallagher.

Jack and his family were Paul’s special guest at last night’s game after Paul heard the story of Jack and his mother, who recently passed away from brain cancer, earlier in the month via a viral tribute video on Twitter. In the video, Jack told the story of how his mother bought him the CP3 shoes and when she passed, he left one of them by her grave. He then asked if his hero, CP3, would wear his mom’s initials (L.E.G.) on his shoes during a game.

After Paul saw the video, he arranged to have Jack and his family meet him at the Pistons game. Before tip-off, Paul spent some time with the family and gave them three pairs of his news shoes and some other CP3 gear.

“It was unreal,” Jack said of his meeting of Paul. “I still cannot believe it actually happened. This means so much to me and I can’t describe how much Chris means to me for doing this.”

Paul then took the court with the initials L.E.G on his shoes.

“This is the least I could do,” Paul said. “That story touched my heart and if there was any way I could make Jack smile and his family make a wish come true, it was a no brainer. I play a game and am blessed to do so, I have dealt with loss before and wanted Jack to know how much this touched my heart.”

“Today was a gift from god,” Michael Gallagher, father of Jack said. “To have this dream actually happen by the gracious efforts of Chris Paul and the Clippers is more than we could have ever asked for. This is a memory for a lifetime for my son.” 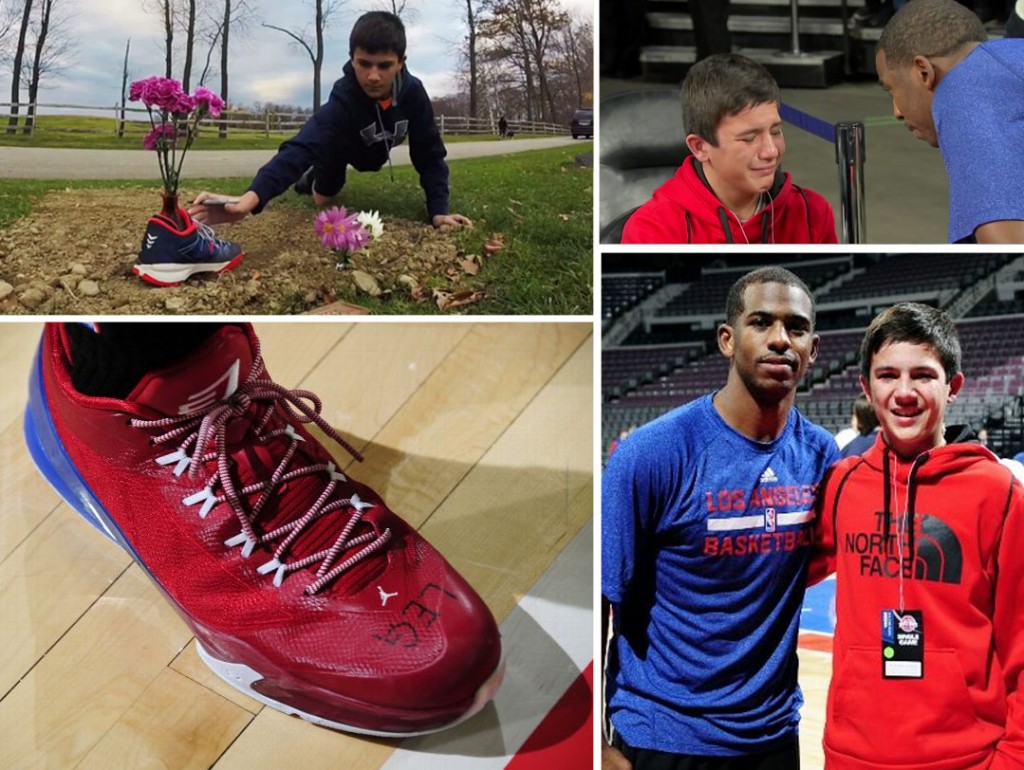 Back in 2002, many people were touched by another Chris Paul story. It was a story that became national news and reached non-sports fans.

When Paul’s grandfather, Nathaniel Jones, was tragically killed at the age of 61, Paul scored 61 points in a game to honor him. He had the opportunity to score more but intentionally missed his last free throw so he would finish the game with exactly 61 points.

“And I laid it up and I got fouled and it went in,” he said about the shot that gave him 61 points. “And I lay there for a second and was just overwhelmed because I knew that at this moment in time, this is something I’d never forget. Ever. It just felt like I could have died and went to heaven right there.”

“I walked to the free throw line, he gave me the ball and I shot an air ball right out of bounds. And my coach took me out. I just looked at my dad and started crying.”

In 2011, ESPN did a follow-up story about the incident. Paul said he has forgiven the five men who took his grandfather’s life and doesn’t think they should serve life in prison.

“Even though I miss my granddad,” Paul said, “I understand that he’s not coming back. At the time, it made me feel good when I heard they went away for life. But now that I’m older, when I think of all the things I’ve seen in my life? No, I don’t want it. I don’t want it.”