There’s been a lot of photo finishes in NBA history to decide the league leader in scoring and none was closer or more ridiculous than the one on the final day of the 1978 season when George Gervin and David Thompson put up historic numbers in a game of can you top this.

Earlier in the day, the Denver Nuggets’ David Thompson started a game against the Detroit Pistons by knocking down 20 of his first 21 shots and scoring 32 opening quarter points. He finished the game with 73 points (28-38 FG) — good enough for second most in NBA history at that time. The career-high gave Skywalker an average of 27.1, which meant George Gervin would have to score an unlikely 58 against the Utah Jazz that night to win the scoring title. The Ice Man scored 53 at halftime and finished the game with 63 (23-49 FG).

Here are a few other close finishes in NBA history.

David Robinson scored 71 points (with the help of his teammates fouling the other team in the final minute despite being up by 20) on 26-of-41 shooting to beat Shaq’s average of 29.3 points per game with 29.8. The Admiral then had to play Hakeem Olajuwon in the playoffs and we all know how that went.

Shaq needed a then career-high 59 to top Michael Jordan, who scored 44 earlier in the day. O’Neal scored 33 and MJ held on to win his 10th scoring title.

Shaq again! Shaq needed 40 points in his final game to beat AI’s average of 26.75. He only scored 18 but won the championship a few weeks later.

Durant averaged 34.6 points a game during the final month of the season to beat out LeBron by less than a single point.

Durant scored 32 points in his final game to eclipse Kobe’s average by 0.11 points. Kobe needed 38 to win the title but decided to sit out the final game. 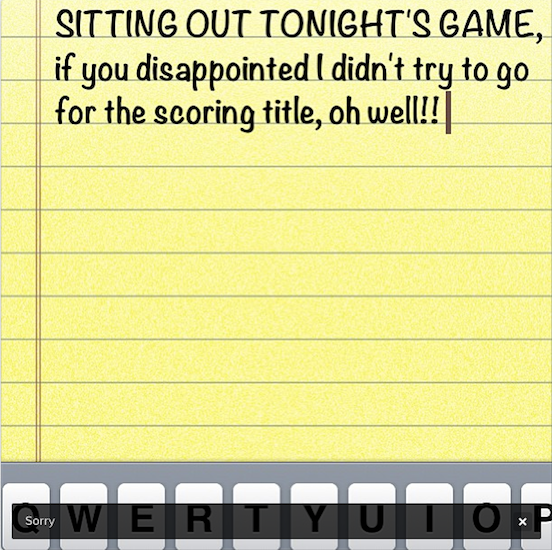 Durant sat out the final game of the season and posted this note on Instagram. Good thing he did because it was very unlikely he was going to score the 70 he needed.

KD made it up to his fans by winning the scoring title the following year by averaging 32 points a game — 4.6 more than #2 Carmelo Anthony.