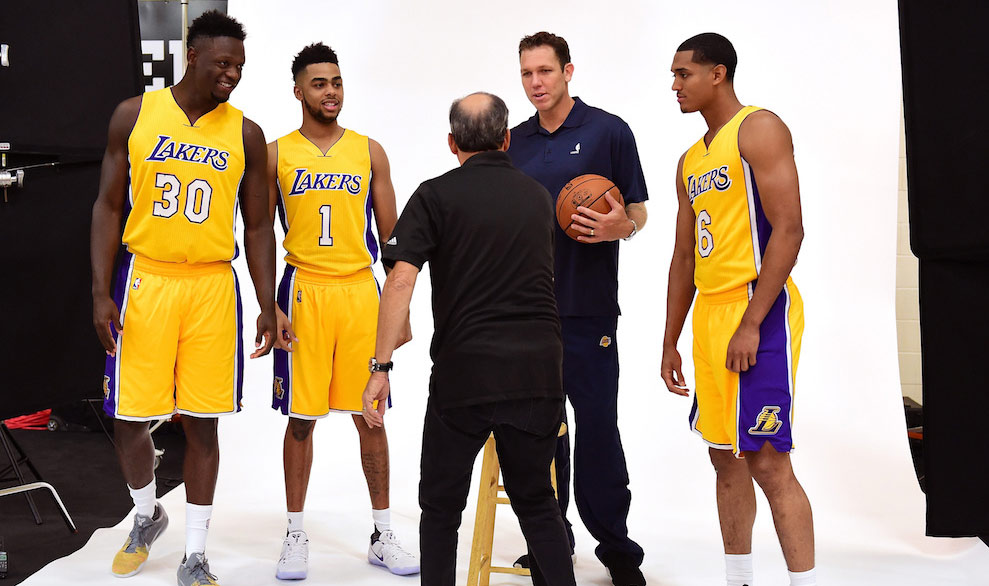 The last time the Lakers won 30 games in a season, Lakers coach Luke Walton was playing with the Cavs under coach Byron Scott and half of the rising stars on the Lakers current roster were still in college or high school. After eight games this season, the Lakers have four wins, including a season-opener against the Rockets and a 20 point beatdown on the Warriors. They are also playing like a team that actually believes in “team,” believes in themselves and believes they can win. Much of this credit belongs to Byron Scott’s replacement, Luke Walton. He has vets like Nick Young playing the best ball in years, D’Angelo Russell playing like a guy who deserved to be picked over Jahlil Okafor, and the bigs, Julius Randle in particular, playing BIG this season.

During Wednesday’s practice, Walton decided to show his bigs he still had some game and challenged a few to some 1-on-1 basketball action.

“When Luke came over, he said he was locking down some of the bigs,” Brandon Ingram said. “That’s just some of the fun we have out here — going at each other, being competitive and just having fun in practice.

They didn’t score 70+ on him like Kobe once did (more on that later) but Thomas Robinson, Tarik Black and Julius Randle did look like Bill Walton with the 6’8 coach on them. Walton even had to resort to flopping.

Although he did do a good job of forcing the 7’1 Mozgov to take a fadeaway and miss (40 second mark).

If you watched the rest of the above video, you will notice a lot of smiling (and not just from Swaggy P) and the fun Ingram referenced, and that should put a big smile on the face of any Lakers fans missing the glory days of Kobe Bryant. 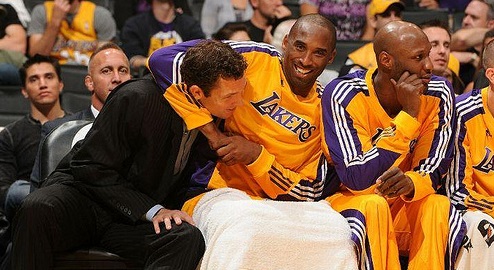 Back to the Kobe dropping 70+ on Walton story. During an October appearance on the “Open Run” podcast, Walton told an amusing story from his rookie season, about him having to guard Kobe in practice with a slight hangover.

Via Silver Screen and Roll

“I probably had too much to drink the night before,” Walton recalled. “So I came in, I was a rookie, I felt good, and they could smell some alcohol on me, and Kobe informed the rest of the team that nobody was allowed to help me on defense, and that I had to guard him the entire practice.

“And I was laughing at first, like ‘oh, this is funny,’ Walton continued. “But in Kobe’s mind, in his eyes, he was like ‘no, i see and smell weakness, I’m going to destroy you today.’ He taught me a lesson (laughing), he taught me a lesson. He probably scored 70-something in practice that day, and I’m begging for help, but none of my teammates would help. His killer instinct, and his work ethic will stick with me forever.”

As ruthless as Kobe was to Walton on that day, the two became good friends (not many can say that) and Kobe has been full of praise since, even saying Walton has a “brilliant mind” is “the next Phil” and is “one of the top two coaches in this league.”