Damian Lillard and the Blazers gave the Bulls a serious a$$ whooping last night when they beat them 105 – 87. Lillard had a team-high 21 points (missing just 2 shots) and 9 assists in just 26 minutes and had his way with the Bulls’ backcourt.  So Mike Dunleavy resorted to dirty play in the 3rd quarter  when he pushed Lillard in mid-air while he was taking a jump shot.

“When I was shooting the b all I saw him coming at me and I thought, `He’s not stopping,” Lillard said. “Anything could have happened.”

Surprisingly after the game, Dunleavy seemed confused about the flagrant foul.

“I was going to intentionally foul him, but he went up to shoot,” he said. “What was I supposed to do?”

Well, lucky for Dunleavey he didn’t do anything else stupid when Wesley Matthews ran up on him while Lillard gave him the death stare. Thankfully for the Blazers, Lillard was able to keep cool and not doing anything stupid too.

The only battles Lillard does on Friday are on Twitter with his 4-Bar Fridays. 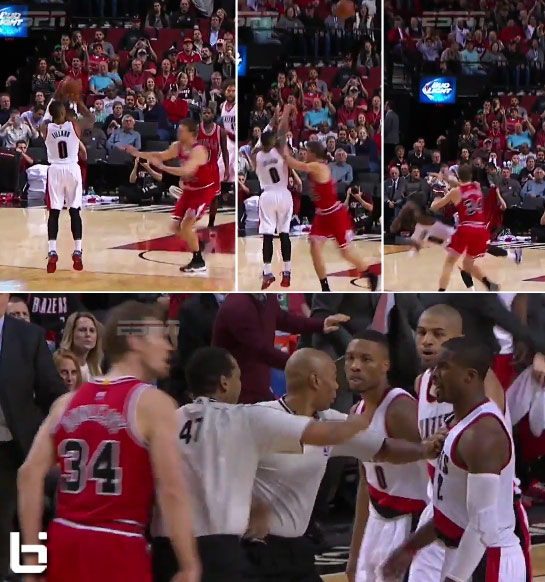