A lot of people thought DeAndre Jordan should have been on the All-Star team instead of Tim Duncan and on Thursday night DeAndre did everything he could against Duncan and the Spurs to prove it.  The Clips did win and DeAndre did have team highs of 26 points and 18 rebounds but he also missed 18 of 28(!) free throws and had plays like the one above where he ended up on the ground after trying to dunk on Duncan.

Duncan being Duncan just helped DeAndre off the floor and then dunked on him a minute later for 2 of his game-high 30 points which included a perfect 5 of 5 from the free throw line.

DJ then went on a dunking spree including a Jordan logo dunk over Marco and a dunk by on Duncan. 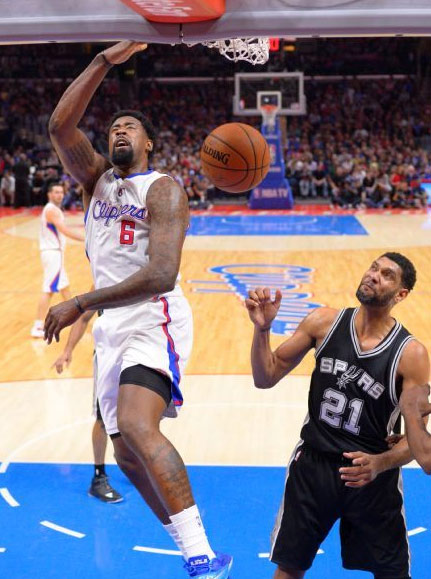 But the real story was the free throws and the Spurs playing hack-a-DJ.

“Unless it gets outlawed, it’s part of basketball,” Duncan said. “He’s going to shoot 50 or below. When he starts shooting better, people will stop doing it. It worked for us and gave us an opportunity. Unfortunately, within those times, we couldn’t make enough shots and sustain our offense enough to get a lead and pull away.”

“I’m big; I have feelings, too,” Jordan said jokingly. “I just hate that we can’t just run and play.”

Hopefully his feelings will feel a little better next season when DJ does get to run and play in the All-Star game. 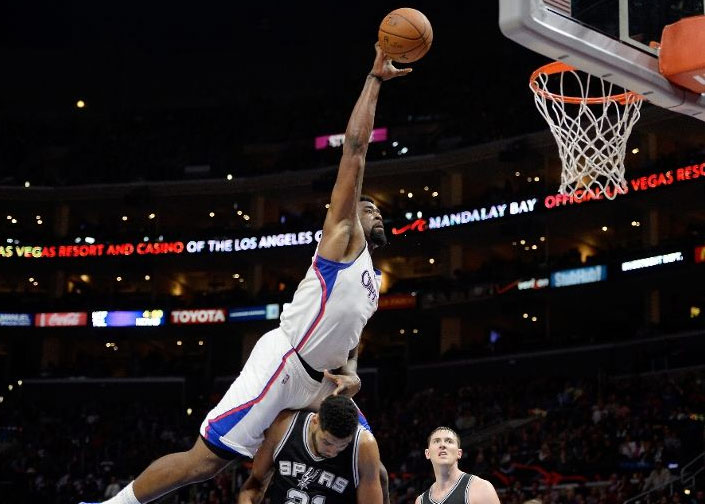