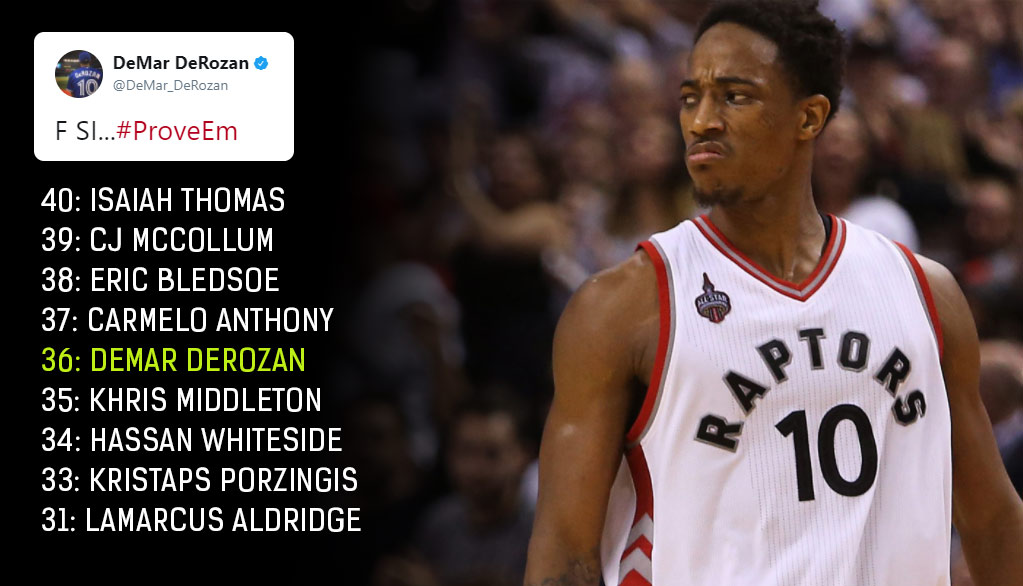 Having a lower rating in a video game is one thing but having Sports Illustrated rank you lower than a player you think are better than will really piss of someone. That someone today is DeMar DeRozan, who didn’t seem to appreciate SI putting him at 36 on their 2018 list of “Top NBA Players.”  The 36 is one number higher than Carmelo Anthony and one below Khris Middleton(?!). This is the second year in a row, the three-time All-Star has taken offense to SI’s list; last season, he tweeted “FOH” when he saw his rating of 46 with the following caption.

DeRozan, 27, has logged massive minutes for six straight seasons, he hasn’t made much progress extending his range, and he’s had the benefit of playing in the glow created by Kyle Lowry. DeRozan’s defensive work has really gone in the tank too.

Here’s what SI had to say this year to justify placing him at 36.

Every year we relitigate the case of DeMar DeRozan, perhaps the league’s most polarizing player,” the magazine wrote. “Our verdict comes down to this: DeRozan is a refined, impressive scorer whose limitations create real problems.”

“For five straight years, the Raptors have performed better with DeRozan off the floor,” it added. “The truth of his value is more complicated than that, though the wealth of mixed signals to this point are beyond coincidence. We know DeRozan can score. But to what end?