In 2001, the Kings Chris Webber had a career game of 51 points and 26 rebounds but it was bitters since his team lost in OT to the Pacers. On Monday night, coming off a career high 48 against the Pacers, DeMarcus Cousins had that same bittersweet feeling after he broke Webber’s franchise record with 56 points in a double OT loss to the Hornets.

“He’s so gifted and talented. Cousins is one of the best big men I’ve ever played against,” Charlotte’ Kemba Walker said. “He’s pretty unstoppable.”

He was especially unstoppable during a 14 point 4th quarter and nine point overtime. The only thing that was able to stop him was the whistle in the final minutes of the game.

“It was a tough loss. I was just sitting here (in the locker room) thinking how a lot of the plays early on could have changed the game,” Said Cousins, who fouled out in the 2nd OT. “But I think through all of the mistakes, we all left it on the floor. You hate to lose games like this.”

Cousins also became the 4th player to have 100 points and 25 rebounds over a 2-game span in a single season (since the NBA merger).  The other 3 were Antawn Jamison (00/01), David Robinson (93/94) and Michael Jordan (89/90).  Despite having enough boards in 1 game, Webber didn’t make the cut after his 56 point performance.  Here’s how that performance compares to the one Boogie just had. 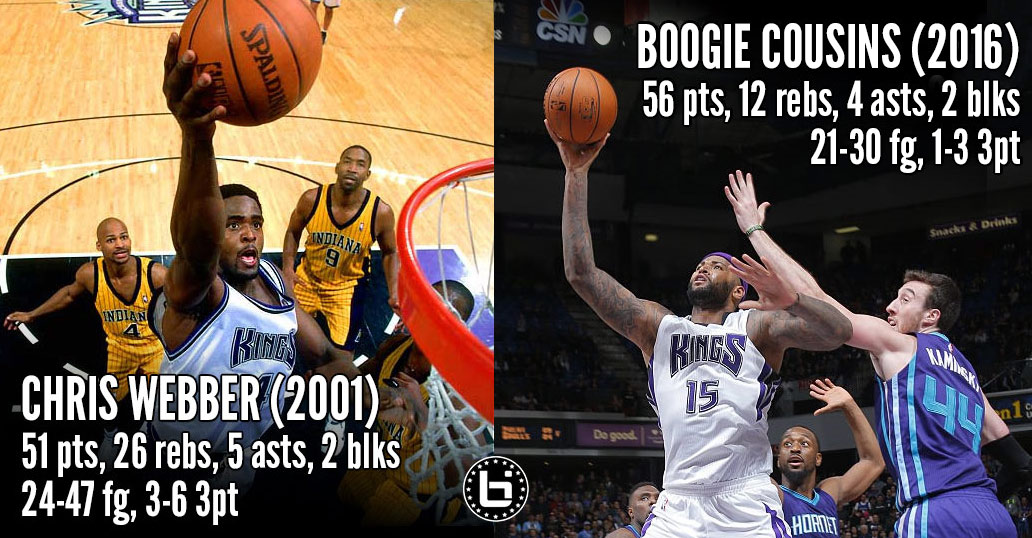