On Saturday, DeMar DeRozan posted a thank you message to the city of Toronto on his Instagram account. It was his first post since he deleted all of his messages on Wednesday, the day the Toronto Raptors traded him to the Spurs for Kawhi Leonard and Drake posted his thank you letter to the four-time NBA All-Star.

To my brother, I want to say 10 million thank you’s on behalf of YOUR city. You are a fixture in Toronto forever and you gave everything you had. Through your leadership we had the most exciting years in franchise history. I am grateful to have witnessed your combination of skill, persistence, and loyalty from the same seats every night. Thank you for being an incredible captain and an even better friend.

Also on Saturday, a member of the NBA Reddit community (Lou Williams) rewrote the lyrics of Drake’s ‘Marvin’s Room’ from the point of view of DeRozan and perfectly titled it ‘DeMarvin’s Room.’ For some reason, the Reddit post has been deleted but thanks to The Score’s Chris Walder, we have a screen shot. 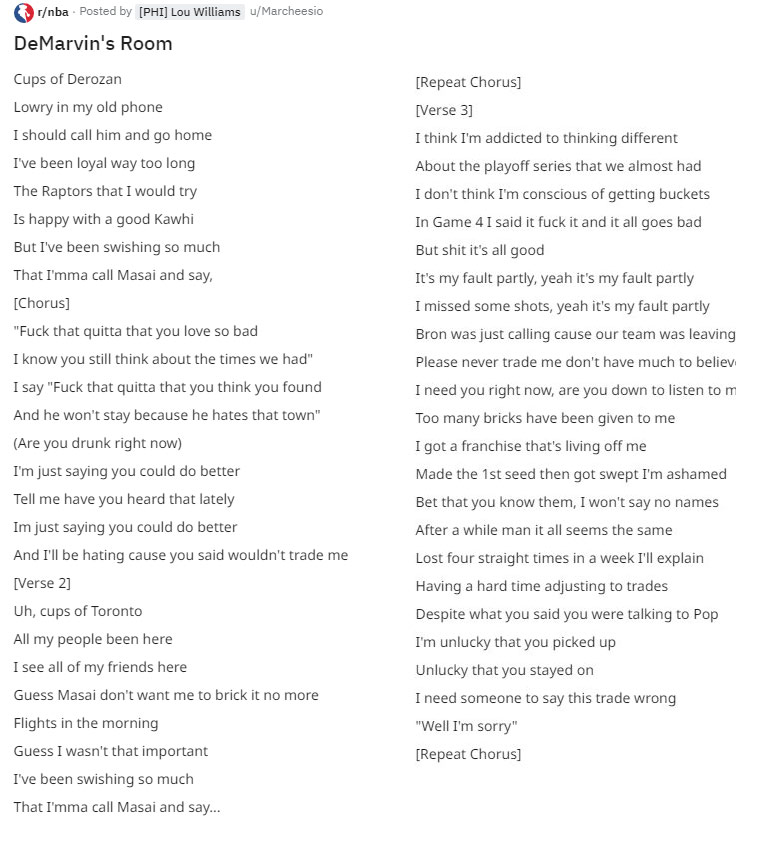 DEMAR I SAY IT DE LESS I LIKE IT

Of all the tweets made about DeMar and the trade over the past few days, the most popular one is shockingly one of mine!

The “DeMar was traded because his handshake sucked” tweet with footage from the 2017 NBA Awards with DeMar, Drake and Will Ferrell has over 59K retweets and 127K likes in four days. That’s more than double the numbers of the WojBomb about the trade (17K & 31K) and the Raptors’ thank you message to DeMar (7K & 20K) combined.

DeMar DeRozan was traded because his handshake sucked… pic.twitter.com/1Q1jUKaCPb