A guarantee way of ending up on Shaqtin’ a Fool is to try to pull a Larry Bird and celebrate a 3-pointer after you shoot it and before it misses.  Nick Young found this out. Kendall Marshall found this out.  Jamal Crawford and Steph Curry are the only players I can think of in recent memory who have pulled it off and last night Dennis Schroder joined that list when he pulled it off against the Wizards.

As you can tell from this pic, his teammates were pretty amused by the Bird impersonation. 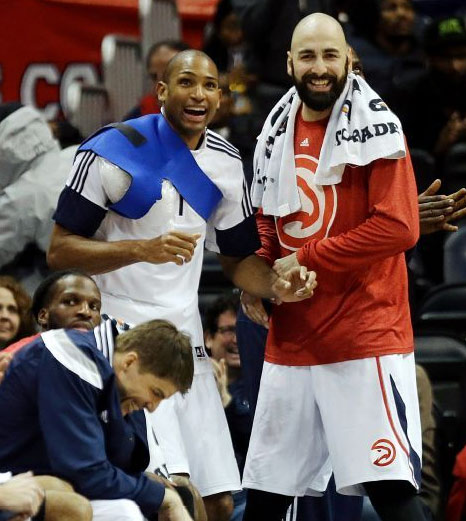 The most interesting thing about Schroder’s confidence and shot is he only had 10 points and was 4 of 14 from the field. Usually when a guy shows this much confidence he’s on fire – like Bird on the night where he dropped 60 on the Hawks and had the Atlanta bench going crazy.

And of course when Bird at All-Star weekend celebrated the 3-point contest win before the moneyball even went in. He actually celebrated before he even stepped onto the court. Story goes, before the event he told the other competitors who is coming in 2nd place.