“I think he sees three baskets right now,” said Bulls Coach Fred Hoiberg about Derrick Rose’s vision. “I told him, ‘Aim for the middle one.'”

Whether he saw 1 basket or 3, Rose was off – hitting 8 of 22 shots – but was 2 of 2 from 3 and was still able to score 18 points as Coach Hoiberg played him a surprising 32 minutes on Tuesday against the Cavs.

“When I’m out there playing, I’m only using one of my eyes,” said Rose. “I close my left eye whenever I’m out there. So I just got used to it from practice.”

The 27 year old Rose also didn’t sound too concerned about the injury and playing with the mask.

“I’m a pro,” Rose said. “Not to be cocky or anything, but seriously, I’ve been playing this game for a long time.”

Although most people didn’t think it was that big of a deal, I personally thought it was a little disrespectful that Nike put up a huge LeBron logo at Rose’s high school on Monday when James paid the student athletes a visit. Nike is a sponsor of the school and Rose did wear LeBron sneakers when he was in high school, but to do this the day before the two teams faced off seemed like a shot to me. I’m pretty sure it did to Rose, who brought the school 2 titles, too. 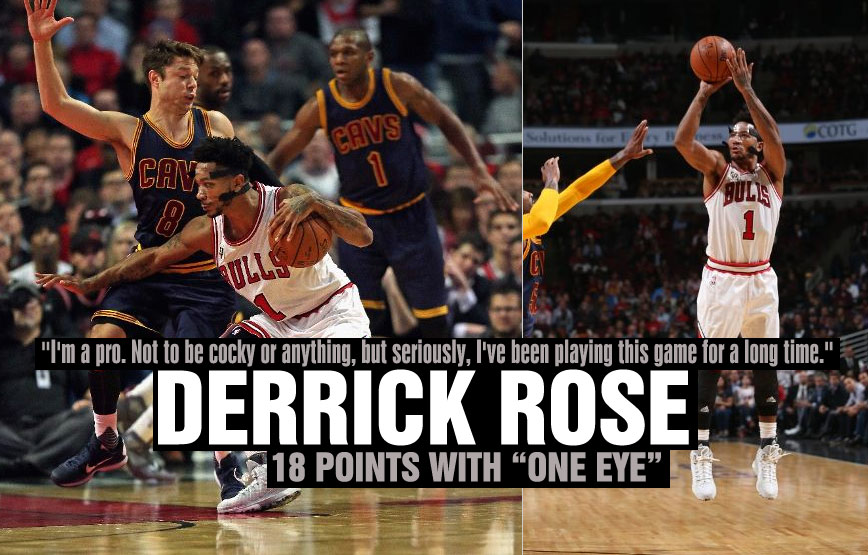