Devin Williams of the Basketball Series “10,ooo Hours” took a trip to China this summer for the adidas “Take On Summer” tour. He’s mostly known as a basketball trainer with the cool narrator voice but we now get to watch him play basketball… he doesn’t disappoint! From the ball handling to the dimes & defense, Devin gave it his best every time he laced up his adidas. 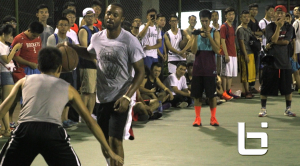 The series Devin Williams is known for 10,000 Hours

For more of the series click here 10,000 Hours Basketball Series