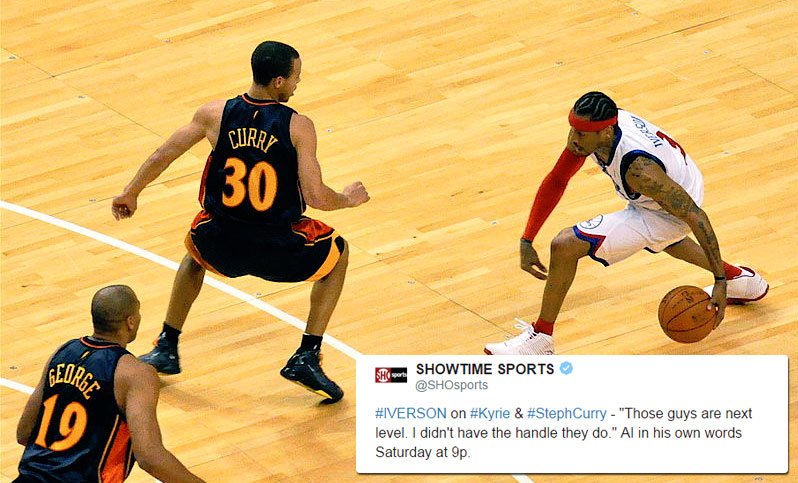 To promote the premiere of the IVERSON documentary, Showtime tweeted out this snippet which is sure to spark a few conversations.

“#IVERSON on #Kyrie & #StephCurry – “Those guys are next level. I didn’t have the handle they do.” AI in his own words Saturday at 9p.”

Nothing against the insane handles of the MVP Chef or our favorite uncle, but Iverson was just being modest. He had just as much or better handles than those guys and Isiah Lord Thomas III, J Crossover, The Pistol and White Chocolate.

Past His Prime Iverson vs a Rookie Steph Curry

Flashback to 2009, when a rookie Stephen Curry had the opportunity to play against one of his childhood heroes during AI’s farewell season in the NBA.

Steph put up a nice stat line of 14 points, 4 boards, 4 assists and 4 steals but only hit 38% of his shots while turning the ball over 4 times and committing 5 fouls. An under-control-way-past-his-prime AI finished the game with 20 points on 7-of-10 shooting and 4 assists. He would score 20+ four more times in the final 22 games of his Hall of Fame career.

And here’s Steph Curry saying, “lowkey, I always wanted to be like Allen Iverson,” when asked about wearing a shooting sleeve during Game 1 of the 2017 NBA Finals.