36 year old Dirk Nowitzki didn’t score 41 points like Westbrook, didn’t cross anybody like Steph, or posterize any defenders but he did have the play and dunk of the night during Sunday’s All-Star game. In one single epic play, Dirk  channeled Michael Jordan by catching an oop with his tongue sticking out and channeled his ex-teammate Vince Carter by pointing up to the sky after the dunk the same way Vince did in the 2000 NBA dunk contest. .

“We were actually joking Coach was going to write up an alley-oop play for him,” said Steph Curry, who threw the lob. “But he needed to get loose. When that play happened, when I threw it, I saw him at the last second. I didn’t know who it was.

“When I made my mind to throw it up, I looked to see who it was. I already committed to throwing it. I just hoped he could get up there, and he did.”

As great as it was seeing Dirk catch his first lob since 2004, Steph enjoyed the Vinsanity tribute more.

“The celebration was even better than the dunk, pulling out the old Vince Carter celebration. So that was pretty clever.”


It seems that dunk by Vince is one of his all-time favorites because this isn’t the first time he’s referenced it.  Back in 2012, Dirk did some colorful commentating for the Mavs and did his best Kenny Smith impersonation after a lob between Jason Terry and Brandon Wright.

“Hey, that’s what I do,” Nowitzki jokingly said to Marc Stein in an ESPN Radio interview about his oop. “The guys are killing me. They said the last alley-oop I had was in the Hoop Summit in ’98. It was great. Steph lobbed it up for me. He kept it nice and low, below the rim for me to get it.”

During the post game interview Dirk also said he was “happy” because he “got a dunk and a 3.”

Whether he knows it or not, he did a whole lot more than that,  What Dirk did was sum up what All-Star weekend should be – a time to have fun, honor the stars before you and inspire the ones who will be NBA stars in the future. 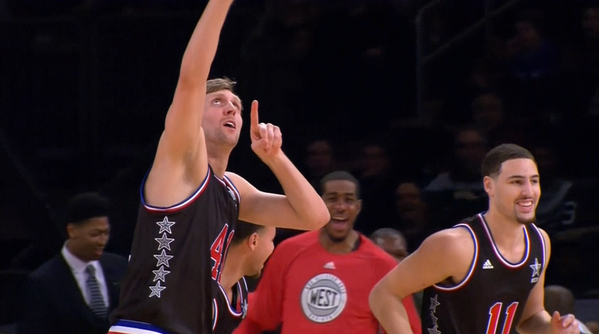