Dirk and Kristaps. Here’s two guys who were booed on draft night and quickly became crowd favorites with their personalities off the court and great play on it.  But not even future hall of famer Dirk Nowitzki was able to shine on the court as quickly as Kristaps Porzingis.  The 20 year old Latvian rookie is not only a favorite to win rookie of the year but a lot of people consider him the best player on the team (over Carmelo Anthony) and think he’s the next Dirk.

“The comparisons are more than fair,” said Dirk about people comparing Porzingis to him. “He’s probably way ahead of the curve. When I was 20, I was scared to death out there. … He’s almost averaging a double-double, so he’s way better than I was at 20. So the comparison’s probably unfair to me.”

In their first match-up, Dirk scored 25 points and got the W as the Mavs were able to hold off a late 4th quarter run by the Kristpas (12 points in the 4th quarter) and the Knicks.

He’s for real,” Nowitzki said. “We’ve said it before. He’s tougher than you think. He’s long. He’s athletic. He can put the ball on the floor. … The sky’s the limit for this kid, not only because he’s good but also because I heard he lives and breathes basketball. He stays in the gym, he works hard and doesn’t let all this hype here get to his head. You’ve to root for him.”

Kristaps finished the game with 28 points on 13 of 18 shooting to go with 2 board and 2 blocks.

“Obviously, he’s showing some respect to me. That shows me that maybe I have the potential to one day be as great as he is,” Porzingis said of Dirk. “I’ve got to keep working, and hopefully, I can be as good as he thinks I can be.” 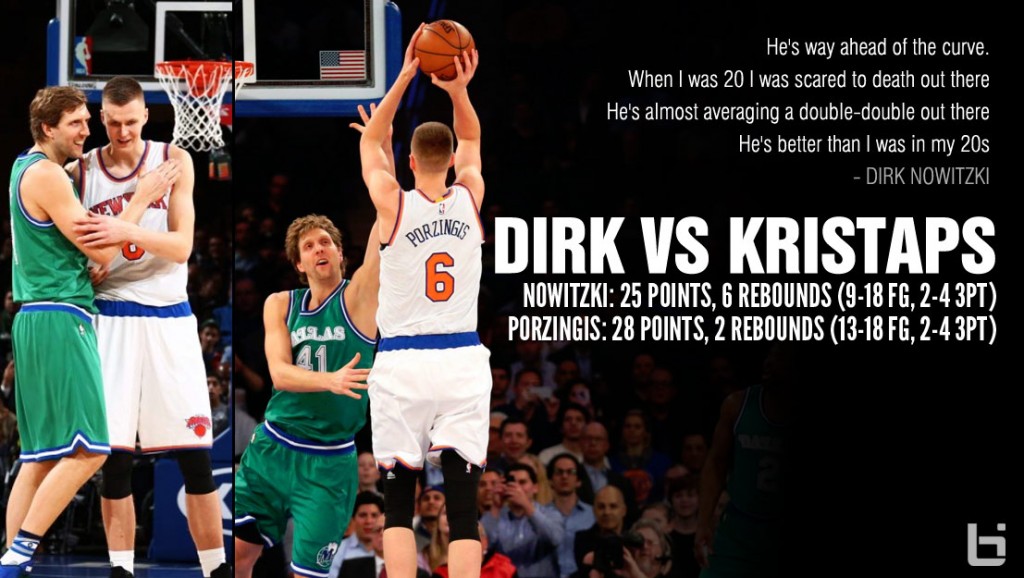