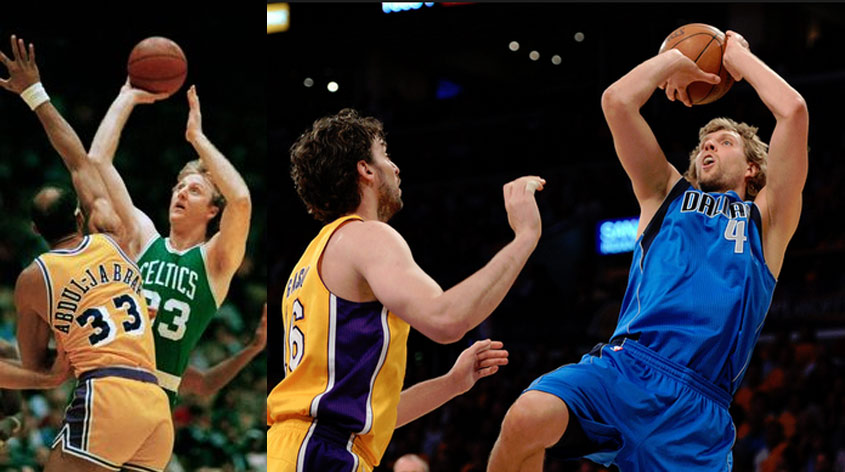 Yes Dirk Nowitzki is a NBA champion, a MVP, a top 50 player and a great shooter, but outside of being white and playing his entire career with the same team, I’m not sure why people always feel the need to compare him to 3 x NBA Champion, 3 x MVP, top 5 player and arguably the most feared shooter of all-time Larry Bird. Actually I do, it’s because they are both white. Real white. Never mind Dirk is 3 inches taller and a lot more athletic but with half of the moves and not even a fourth of Bird’s passing ability.  Dirk is white so he has to be compared to white people and 7 foot black shooters like Kevin Durant – who said he patterned his game after Dirk – got the cursed “Next Jordan” questions  coming out of college. So who got the “Next Dirk” ones? White guys like Kelly Olynyk did.

On Tuesday, during an interview with KRLD-FM 105.3, the great Kareem-Abdul Jabbar was asked if he thought Dirk was better than the legend he tried to fight in the 1984 NBA Finals and this is what he had to say, via DallasNews.com

“No way. No way that Dirk Nowitzki is better than Larry, and Dirk is a first-rate — he’s an All-Star. Absolutely any time he’s been on the All-Star team, he’s deserved it. But Larry, I think, had more going in terms of leadership. If you take the 48 minutes of the game, for every second on that clock, Larry knew where to be on the court to be the most effective for his team. And Dirk doesn’t play the game that way. He’s a volume shooter. He’s a streak shooter and he’s wonderful at that — and he’s had a great career; I’m not trying to knock him, but Larry is one of a kind.”

One other thing worth mentioning about Bird and “volume shooter” Dirk is they are both members of the elite 50-40-90 club which refers to FG/3PT/FT percentages. Dirk pulled it off once while Bird did IT twice (4 times if you rounded percentages). During the 2nd season he did it, Bird also averaged 7.6 assists and 9.2 rebounds to go with his 28.1 points per game.