Nothing that highlight worthy happened at this EBC Celebrity game back in 1986, but what makes this video so amusing – besides one of the worst dunk contests you will ever see – is the promotional appearance of Brooks shoes & The Human Highlight Film Dominque Wilkins.  Yes Brooks shoes!

Before Nique was promoting the Reebok Pumps, he was ‘Jammin’ with Unique’ kicks by Brooks Footwear, who on this day, presented Nique with the first (and probably last) ‘Ring of Fame’ at the legendary park.  When asked to say a few words to the crowd, Nique gave a very short speech complimenting the event and then saying,

“I just wanted to come here to help promote my new shoe called the technique. Hopefully it will be worldwide in a few years.”

Well, despite winning dunk contests, leading the league in scoring, putting up huge numbers against legends like Converse wearing Larry Bird and Nike wearing Michael Jordan, nobody cared about Brooks’ sneakers – not even Nique’s own kid.

It was January 4th, ‘88. Dominique Wilkins stormed into the offices of Bob Frisella, Brooks footwear’s head of marketing, the latest copy of Sports Illustrated rolled up in his huge fist. Before Frisella could even get a word out, Wilkins had thrown the magazine down on his desk—THWACK!—open to a lavish Air Jordan ad spread.

“What the hell is this?,” ‘Nique shouted, sweat dripping from his freshly-trimmed high-top fade. “I’ve been wearing your freakin’ shoes,” he slams a size 16 on Frisella’s desk—CRUNCH!—shattering his favorite coffee mug, “for years, and you haven’t done ANYTHING!

“I’ve led the league in scoring, won that stupid Slam Dunk Contest, and you won’t even put an ad in Cat Fancy, let alone SI! My own KIDS won’t wear my shoes! ‘Air Jordans, daddy; we want Air Jordans!’ Do you know how EMBARRASSING that is? Do you?”

Frisella just sat there, Taster’s Choice dripping on his oxblood Weejuns. “Look, ‘Nique,” he finally pleaded. “I know you’ve been doing a lot for us, and I know we haven’t exactly made you a household name, but we’re going to do something about it.” Wilkins sat down. “If you win the Dunk Contest this year,” Frisella said, “we’ll do a national campaign. SI, NBC—we’ll even get you a recurring spot on Miami Vice. Anything you want.”

Lucky for Brooks they didn’t have to honor the “anything” because Nique was robbed in Chicago at the 88 dunk contest. Jordan walked away with the trophy and the huge $12,500 check and Nique did the same to Brooks.

A year later, this commercial by Reebok appeared on TV. 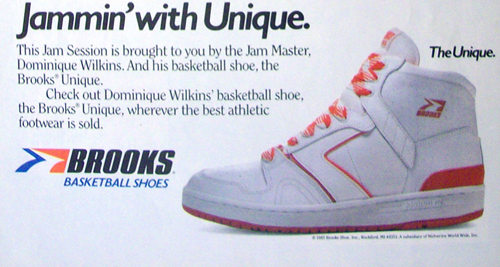