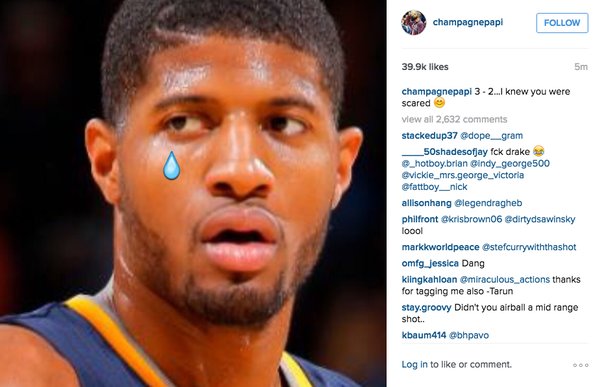 If you post something on Instagram and it gets almost 40k likes and over 2,600 comments in just 5 minutes, then it’s also been screen captured and saved a few hundred times so if you delete the post, it’s not only going to survive online, but it’s going to become even bigger news.

That was the case after the Raptors survived Tuesday’s GM5, when Solomon Hill’s game-tying 3 at the buzzer was called off. Drake posted the above meme of Paul George with the caption “3-2…I knew you were scared” followed by a smiley face.

Drake is obviously just messing around with George, who had a playoff career-high of 39 points to go with team-highs of 8 boards and 8 assists in the loss, so don’t take this “shot” too seriously. Now, if Kyle Lowry made the post then we might have a different story (because of this “dirty” play), but it wasn’t, so feel free to laugh at these other classic Drake moments from the Raptors victory.