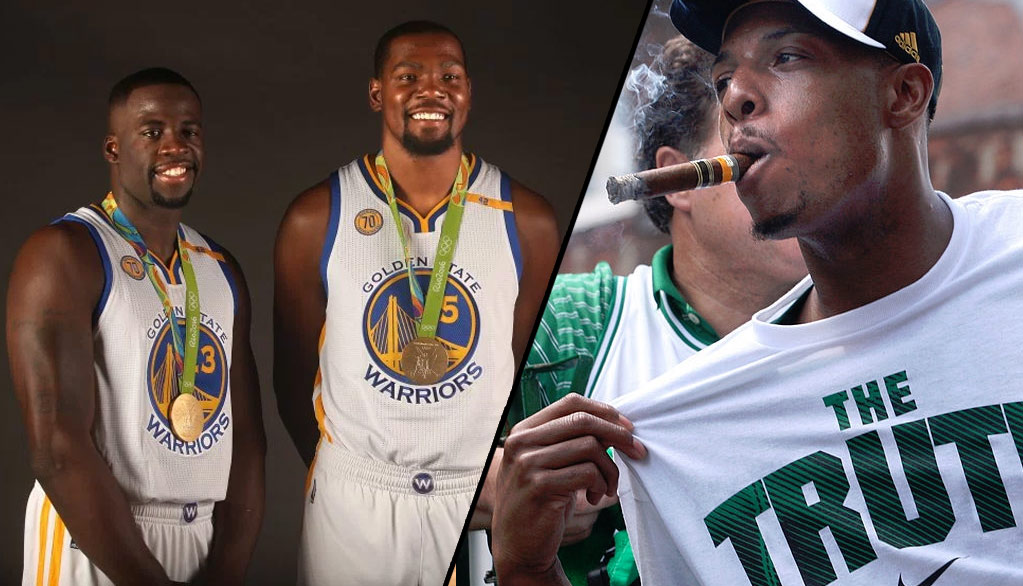 Are you tired of questions and conversations about Kevin Durant joining the Warriors? If not, then you might be amused by Draymond Green’s response to Paul Pierce’s comments about KD’s address change.

First, let’s see what The Truth had to say during an interview on Sirius XM NBA Radio.

I’m an old-school guy. I’m a competitor. You want to be the best, you’ve got to beat the best. That’s always been something that’s driven me. Today’s day and age, a lot of these guys are friends. That’s like if Bird decided to go play with Magic or something. I think the competition makes the game what it is. Oklahoma I felt like was a contending team. They had Golden State on the ropes.

I understand when you have great players who are on losing teams who are tired of losing, struggling in the playoffs every year. You’re the lone star. I’ve been in that position. I could have left Boston years ago but I stuck it out. I just feel like when you’re that close as a competitor, you don’t go join a team that just pushed you out. That’s just me personally but we’re living in a day and time where there’s a new generation. Guys I don’t think are as hungry or as competitive as my generation was, and that’s why you’ll probably see more of that.

And here’s what Draymond had to say about that.

I just wonder at what point do they get bored talking about the same thing. You got all these guys talking. Like Pierce today, like, dude nobody care what you did or who you did it for. Just give it a break. Everybody got something to say and want to take everything he say and twist it. Like, he play with the Warriors. OKC has their team, we have our team. He left there. Nobody complain when somebody leave Apple and go to Google. Aren’t they in competition with each other? Nobody talk junk about the CEO who leaves Apple and goes to Google. As a basketball player, you are the CEO of a business. You are a business. Kevin Durant is a big business. He is the CEO of that business. So him going to play basketball for a different team, the CEO decided to leave where he was at and go somewhere else.”

But there’s so many guys in this league that are so stupid they don’t think like that. They don’t think business wise. It happens every day in the world. But in basketball it’s a problem. Aren’t you competitive in your day job if you work for Apple? Don’t you want to outdo Google? What’s the difference on the basketball court. It’s your day job. You want to do what’s better for you. If it’s better for your family life, better for your happiness. Ain’t no one criticizing them. I don’t understand it. I’ll never understand it. So that’s just me. And I’d be willing to bet my salary ain’t many guys in this league more competitive than me.

Well, actually a lot of people care what Paul Pierce has done – he’s only one of the 10 best small forwards and Celtics of all-time. And when top management at companies move their office plaques to their competitors’ office, it’s a huge deal, and I’m not even talking about companies with business celebs like Apple and Google – two companies with non-poaching agreements. But KD going to the Warriors isn’t like Apple CEO Tim Cook going to Google, it’s like Tim Cook going to Google to become a VP with the IPhone and ITunes.

I will agree that most people just need to move on from this beaten dead horse story and stop bugging members of the Warriors and Thunder about it. Westbrook even made it clear on Thursday he’s done answering questions about it. So media people, can you please stop asking, because it’s not “cute” anymore.