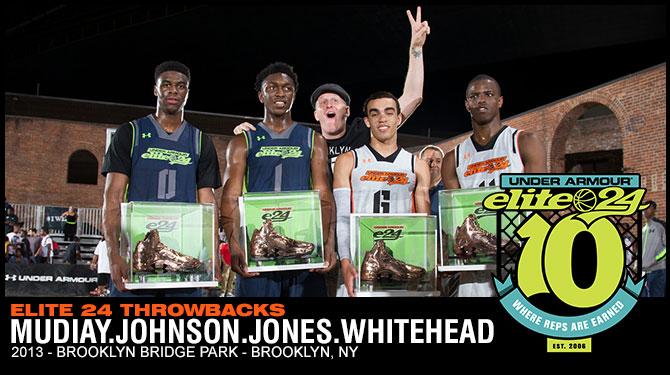 For a while it looked like the Under Armour Elite 24’s return to New York would lose some of its luster because of a blowout on the scoreboard.

That changed when Team Bed Stuy, the slight favorites coming in, made a frantic comeback after falling behind by 30 points early in the second half against a Team Coney Island team that eventually pulled out a 114-109 victory at Brooklyn Bridge Park.

Not only did the fans at the makeshift outdoor court down under the Brooklyn Bridge, i.e. Dumbo, witness a competitive game in the second half, the crowd also got to see a “battle,” a style of play where two players on opposing teams go back and forth trying to out do each other, that New Yorkers are known to love.

Team Coney Island held a 66-42 halftime lead and built its lead to 30 points (72-42) on a lay-up by Chris Chiozza from White Station (Memphis, Tenn.) early in the second half.

That’s when Mudiay started cooking. The nation’s top point guard, who announced for SMU during halftime of the ESPNU telecast, had four points in the first half. He began to convert his shots in the second half and helped Team Bed Stuy cut its large deficit. Mudiay finished with 22 points. Mudiay also made a couple of shots on Whitehead, but the Brooklyn native more than held his own in the match up to the pleasure of the pro-Whitehead crowd.

Theo Pinson from Wesleyan Christian Academy (Greensboro, N.C.) captured the Under Armour Slam Dunk Contest by jumping over his mother, Barbara Pinson, on a dunk that made ESPN’s SportsCenter Top 10 highlights of the day. Devin Booker from Moss Point (Moss Point, Miss.) won the 3-point contest.

2014
The game moved from Dumbo to a spectacular view of the New York skyline right on the crest of the East River in Brooklyn Bridge Park. Fortunately, the play on the court was just as spectacular as the views. This game featured one of the most athletic groups in Elite 24 history in one of the best settings for a grassroots basketball event ever seen. 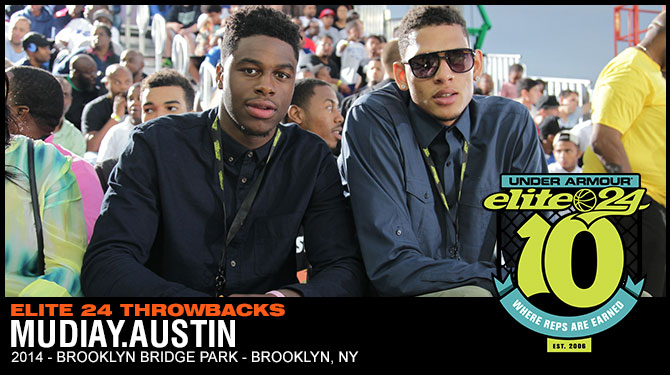 Early on the spectacular play came mostly from wing Terrence Ferguson of Prime Prep (Dallas), as his Team Freedom held a steady first half lead. His alley-oops and the finishes around the basket by Josh Jackson of Prolific Prep (Napa, Calif.) and Harry Giles of Wesleyan Christian Academy (Greensboro, N.C.) helped Team Freedom build a 69-60 halftime lead.

The second half belonged to Team Liberty, and it eventually went on to win the game 127-116 behind a strong team effort. Team Liberty took a 87-86 lead on a put back by guard Jalek Felton of Mullins (Mullins, S.C.) with 13:52 remaining in the game. When Felton nailed a 3-pointer with 7:20 to go, Team Liberty had a 113-107 lead and any idea of a last-minute Team Freedom comeback was halted by rain with 1:44 remaining in the fourth quarter.

The best “battle”, as encouraged by Elite 24 MC’s Bobbito Garcia and Joe Pope, was staged by guard Malik Newman of Callaway (Jackson, Miss.) and Antonio Blakeney of Oak Ridge (Orlando, Fla.). Blakeney helped Team Liberty to victory with 22 points on 10-of-14 shooting. Newman finished with 16 points for Team Freedom.

Immensely helping the cause for the victors was power forward Chase Jeter of Bishop Gorman (Las Vegas, Nev.). The Duke recruit set an Under Armour Elite 24 game record with 15 rebounds. He also had 17 points to cop MVP honors along with Team Freedom’s Jackson.

Jackson made 10-of-12 field goals and finished with a team-high 22 points along with seven rebounds. Giles chipped in 14 points and 11 rebounds. The game’s high scorer was Team Liberty’s Jaylen Brown, a powerful and athletic small forward from Wheeler (Marietta, Ga.). He scored 23 points on 9-of-13 shooting from the field.