Here’s a trivia stumper for the casual basketball fan: Who has the NBA record for most assists in the game?

For an extra 100, name three teammates of that player?

The answer to the first question is former Orlando Magic player and current NBA coach Scott Skiles, who dished out 30 assists back on December 30th of 1990 against the Denver Nuggets (a team he loved abusing). 30 is amazing, but to think he had to depend on 30 shots to be made by teammates Nick Anderson, Dennis Scott, Terry Catledge (who was rumored to put alcohol in his Gatorade) and goon Greg Kite is really amazing.

The Magic won this game by 39 in a 155-116 victory. And back in 2005, during a 15-year anniversary of the game, Scott Skiles talked about that magical night with Magic Magazine.

THE GAME I’LL NEVER FORGET – By Scott Skiles, as told to Brett Ballantini

As a point guard, I thrived in a leadership role. It was my job to make things happen on the court. I always tried to do anything to help the team, including score, but my main job was to run the offense and get my teammates involved. In 1989-90, the Orlando Magic’s first year, we finished 18-64, and it was more of the same at the start of our second season. We hadn’t changed personnel too much but were still jelling as a unit.

We had a lot of guys who could run, catch the ball and finish a play, such as Dennis Scott, Nick Anderson and Jerry Reynolds. I just tried to get them the ball at the right time and let them do the rest. When they scored, it made me look very good. And the very best example of that came on December 30, 1990, when we played the Denver Nuggets at the Orlando Arena before a capacity crowd of 15,077.

We were struggling, and so were the Nuggets. In fact, we were the two worst teams in the league, and in the same division. We were last in the Midwest at 6-23, and the Nuggets were a half-game better at 6-22.

To complicate matters further, I was having my best year as a pro and was the subject of trade rumors. The Detroit Pistons were hot on my trail, scouting me every game. It was flattering to attract interest around the league, but I was happy in Orlando. I was getting a lot of playing time with the Magic, and I was trying to be a part of something great for the fans there.

Things were looking good for us heading into this game vs. Denver. The Nuggets were plagued by injuries, with point guard Michael Adams their only healthy starter. Plus, Denver was running and gunning under new coach Paul Westhead, so on most possessions the Nuggets would just come down the court and launch a shot. Adams and Mahmoud Abdul-Rauf [then Chris Jackson] liked to shoot from deep, and we knew that if their shots were off, deep rebounds could lead to a lot of fast breaks for us. Denver also wasn’t known as much of a defensive team, so they weren’t going to slow our attack.

The game was like ones I played out on the asphalt when I was growing up. Denver was playing wild and crazy, and we were taking advantage of that by scoring on easy drives and dunks. It was like a layup drill at times. The Nuggets didn’t contest many shots, and we opened a double-digit lead right away. After the first quarter, we led 35-23, and after two periods, we had set a Magic record for points in a half, leading 72-49. I already had 14 assists.

My assists kept coming, and in the third quarter I broke Orlando’s assists record of 18 — which I had set earlier in the season. By the end of the period I had 25 assists and was nearing the NBA record of 29, set in 1978 by Kevin Porter of the New Jersey Nets. I realized I had a lot of assists, of course, but didn’t know how many. I couldn’t keep track of something like that during a game.

With about seven minutes remaining, I threw an alley-oop pass to Reynolds, who scored. It was my 29th assist, tying me with Porter. Coach Matt Guokas called me over and said that if I got one more assist, he would take me out, because we were winning big.

It was announced that I had tied the record, which put some pressure on me to break it. I made a few passes that could have earned assists, but either the shots were missed or one of my teammates would dribble the ball toward the basket before shooting, negating a potential assist.

Time was running out, and my total was still 29. Finally, with 19.6 seconds left, Reynolds scored on a 20-foot jumper off one of my feeds, and I had the record. I was very happy, and the crowd was yelling and cheering loudly for me.

I finished the game with 22 points and six rebounds to go with the 30 assists. What was funny is Reynolds, the guy who scored the record-tying and -breaking baskets, also was one of the guys who kept me from breaking the record more quickly. Three times I passed to him for the record-breaking assist, and three times he drove to the basket for a shot. It turns out that Jerry was one of the only people in the arena who didn’t know I was on the verge of a record.

We won the game 155-116, and broke a bunch of records as a result. In addition to my 30 assists, I set a team record with 16 assists in a half. The 155 total points and 83 in the second half both were team records, as was the winning margin of 39 points.

What meant even more was that this game helped turn our season around. We played better than .500 in the last three months of the season (20-18), including an 8-3 February.

Someday, someone will get 31, so I don’t think too much about the assists record. But I am proud to know that of all the great playmakers — guys like Bob Cousy, Oscar Robertson, Magic Johnson, Tiny Archibald and John Stockton — I have more assists than any of them in one game. I looked at the film about a week later, and saw that my teammates hit a lot of tough shots off my passes — and that we shot .570 as a team overall. If any of those shots were missed, I would have fallen short, so I owe the record to my teammates.

When my mark is broken, it will be one incredible game to watch. And when someone does, he will have earned it. The game goes on; I won’t be sad or sorry.

This story originally appearing in the June issue of Magic Magazine. 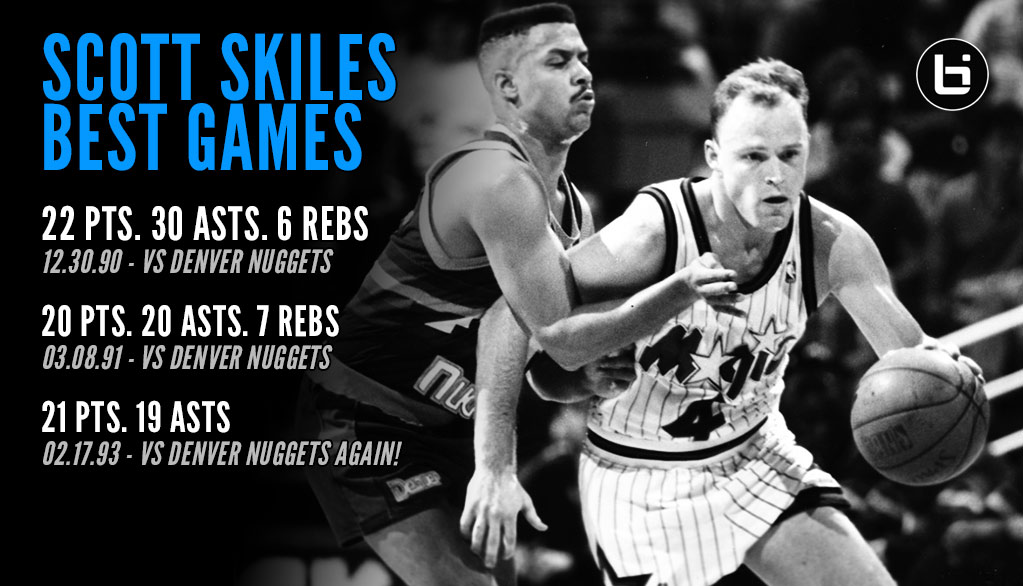