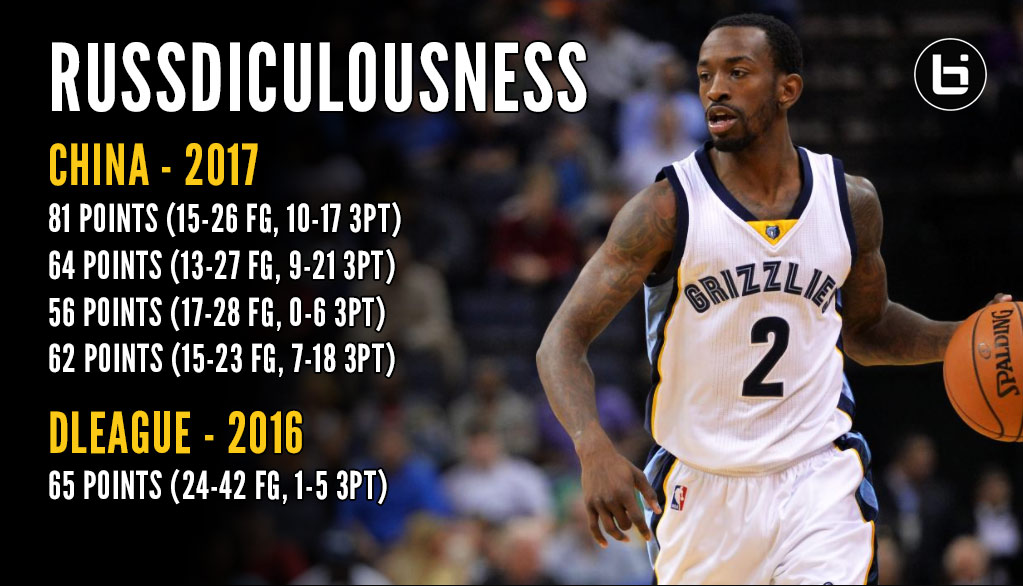 Three years ago, former Lousiville star Russ Smith was celebrating an 81-48 victory over UConn on senior day. Today, he’s celebrating himself dropping 81 by himself in a 142-130 win in China. If pulling a Kobe in China wasn’t crazy enough, he also flirted with a triple-double (8 boards and 7 assists), had 5 steals and connected on 10 of 17 from downtown. There’s a reason why he’s known as “Russdiculousness.”

You might remember the 2014 second round pick of the 76ers from his short time with the Pelicans and Grizzlies between 2014 and 2016. No? Remember when he gave the Warriors a scare by scoring 16 of the Grizzlies 40 4th quarter points? No? How about when he knocked down 24 of 42 shots and set a D-League record with 65 points last year? Still no?

Well, you will probably know his name now. Before pulling a Kobe, he won the NBL Player of the Week award by averaging a league-high 56 points a game on 57% shooting.

I always call JR Smith the “Michael Jordan of China” because of his monster games — like 52 points and 22 boards and 60 points (off the bench) with 14 threes — during his limited time in China, so I guess I’m going to have call Russ the “Kobe of China” since “MJ” is taken and Kobe had an 81 point game and once dropped 60 against Smith’s former Grizzlies team.