With his 4th triple-double on Sunday, the Bucks’ Giannis Antetokounmpo passed up NBA legends Kareem Abdul-Jabbar and The Big O on the Buck’s Most Triple-Doubles in a singles season list; The 2 greats, along with the great mistake Alvin Robertston, each had 3.

What makes the Great (formerly Greek) Freak’s record so impressive is all 4 of his triple-doubles have come in the last 11 games! The only active players to pull that off are LeBron James, Rajon Rondo, Russell Westbrook and Draymond Green. At 21 years old, Giannis is the youngest of those guys to do it – LeBron was 22 years and 330 days old when he did it.

“Sometimes it doesn’t look like he’s sweating, or breathing hard,” Bucks coach Jason Kidd said, “and that just shows how talented he is.”

Besides racking up 12 points, 9 assists and 8 rebounds in the first half against the Nets, Giannis also pulled off the play of the day when he threw down this dunk after faking out Shane Larkin.

“There’s only a couple people in the world that probably can make that play, and he’s one of them,” Bucks Greg Monroe said. 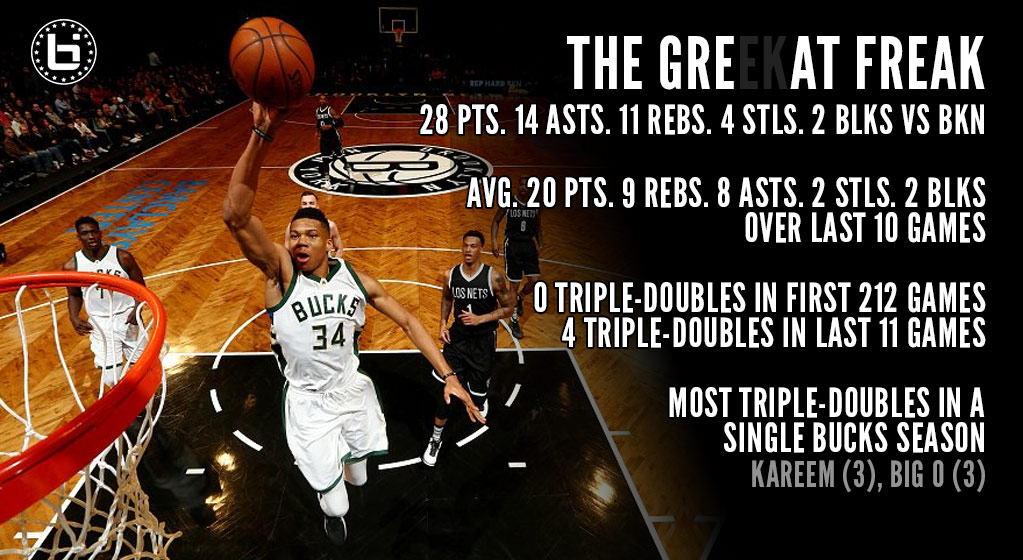