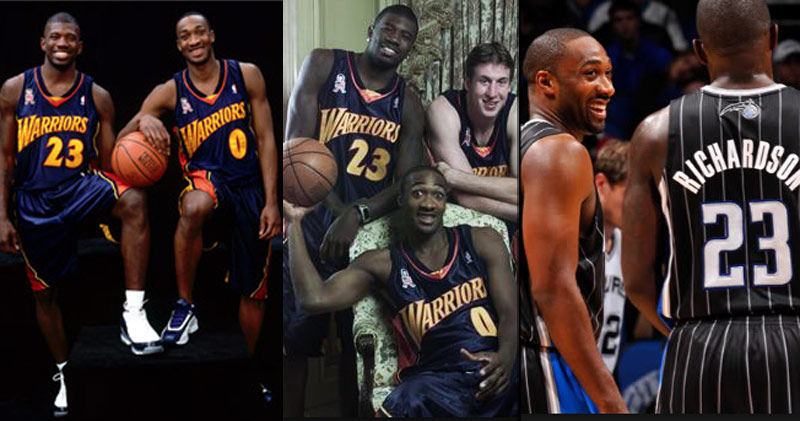 After 2 x dunk champion Jason Richardson announced his retirement on Instagram earlier this week, his former teammate Gilbert Arenas took to Instagram to share some funny and touching stories about what JRich – his first NBA friend – meant to him during Gilbert’s slow start in the league.

My first #NBA friend and teammate, when I was sitting on that bench, YOU believed in me when no one didnt…you took me too #Allstar2001-2002 weekend and i got a chance to experience that #back2backdunkcontestwins…You pushed me everyday in practice to get better…I want too thx u for what u did for me and congrats on leaving on ur #TERMS #myMVP #SAGfinest #GSboys #23 and PS u still black then a muthafucka boy #blueblack lmaoooo

The most humble dude I’ve ever met…he said ( GA I need a dunk for this years dunk contest,I know yo crazy ass got something in that brain yo ass can’t do…the next day I said yo how about come from the baseline and come from behind with the between the legs?? He asked me to show him, knowing DAMN well I can’t do that shit…of course I tried and he started busting out laughing becuz even if the rim was 6 ft I would have still missed that damn dunk hahaha…#jrich didn’t even attempt the dunk and said #IGOTIT and after i win i’mma give u 10k….when he pulled it off in the dunk contest I was so excited, not that he made it but YOU KNOW how much room service u can get with that 10k hahahaha man oh man we had fun #5lotterypick making a #31secondrounder feel like he also was a lottery pick…enjoy ur family time…I’m so proud of u,the girl u met on my 20thbday was the women u get too enjoy ur post career with #JackieYOUtherealMVPinhisLIFE yall enjoy the stress free life….#23jrichRETIRED

So in honor of the two former teammates, here’s a few video clips showing their chemistry and exciting connections during their time in Golden State.